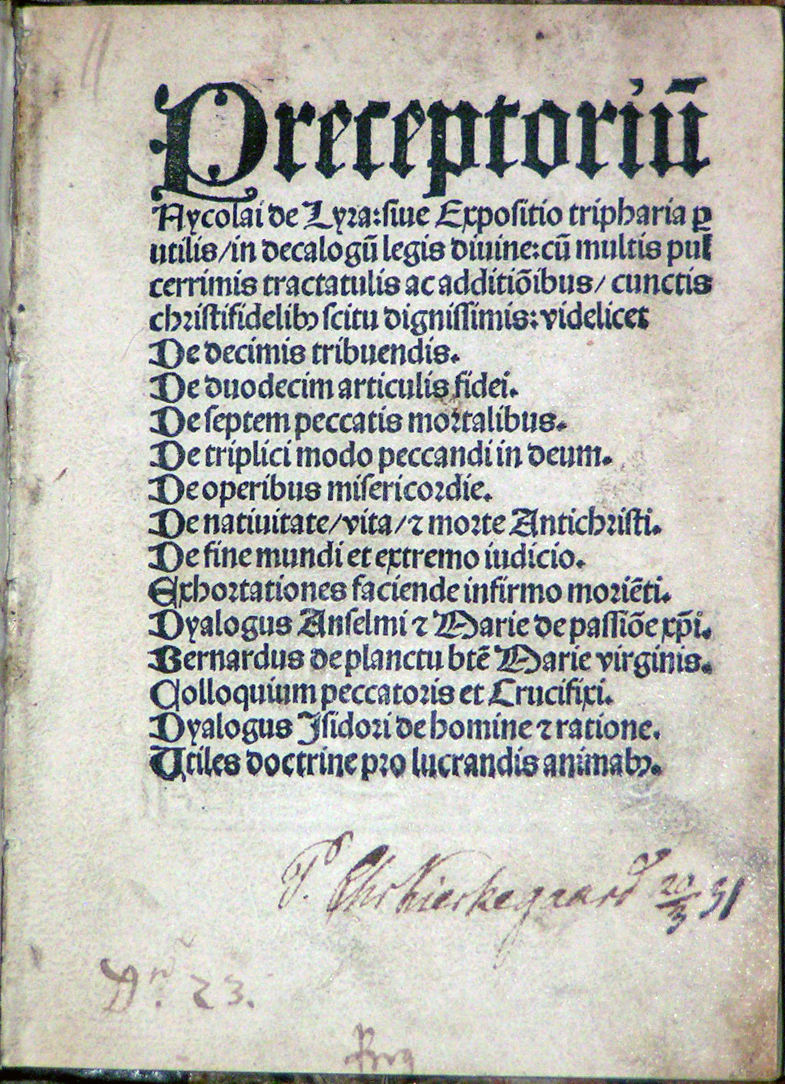 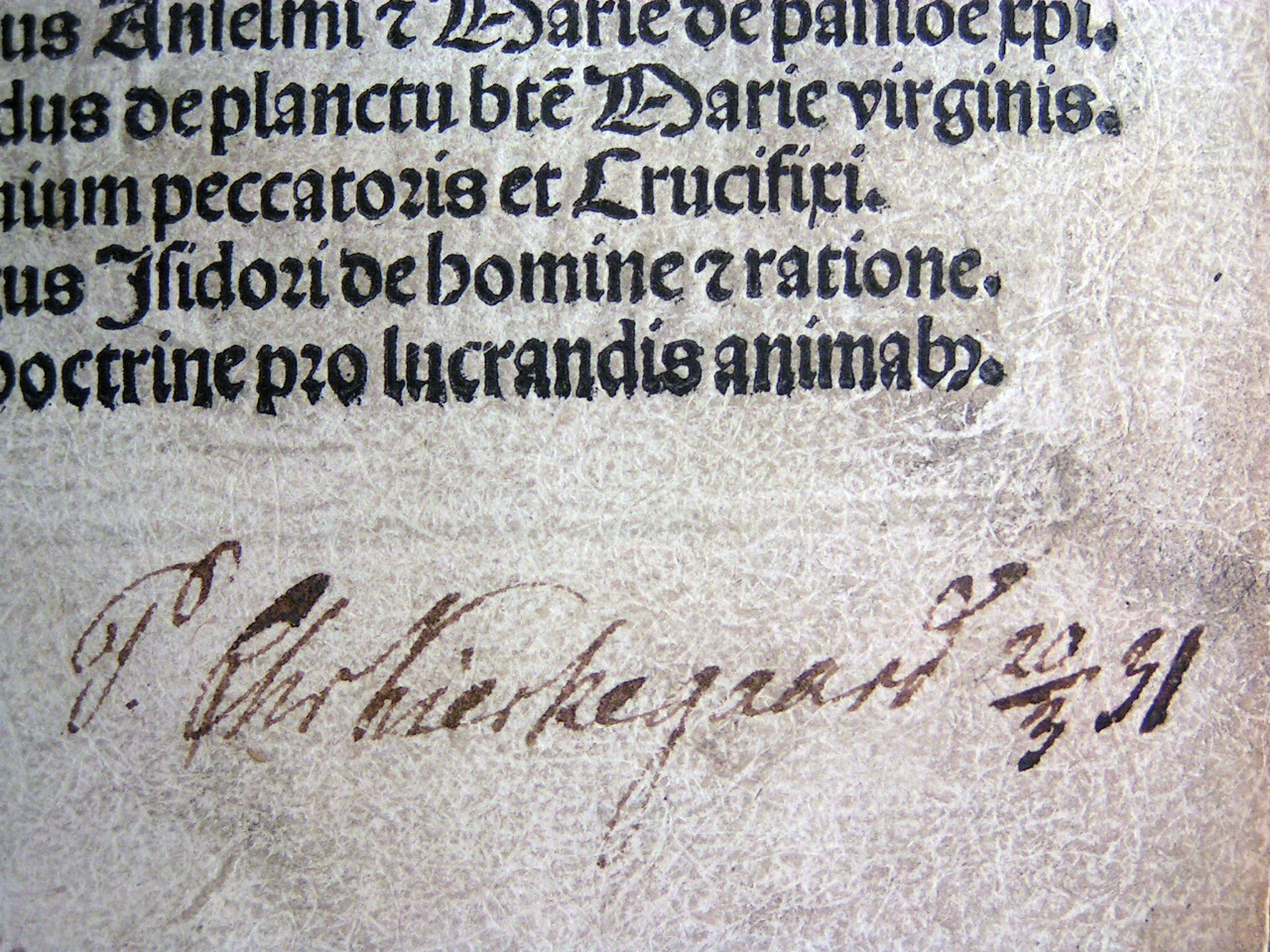 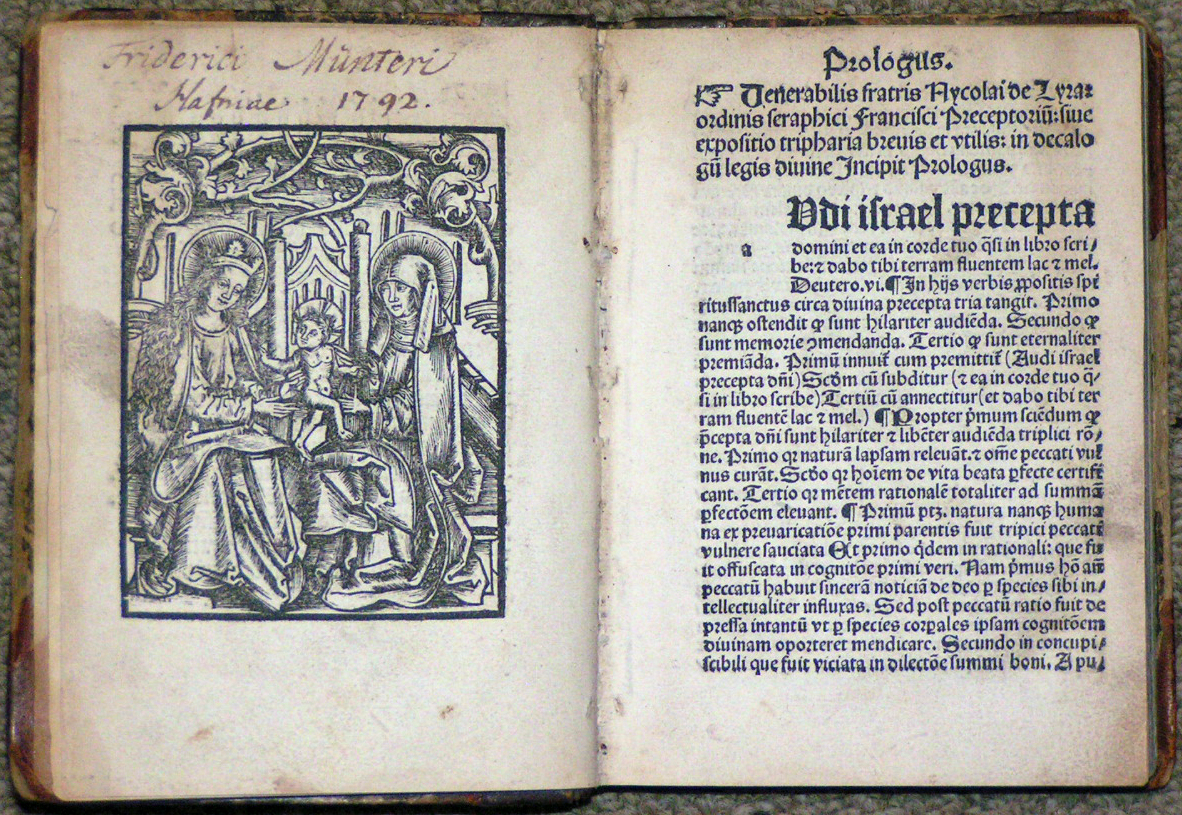 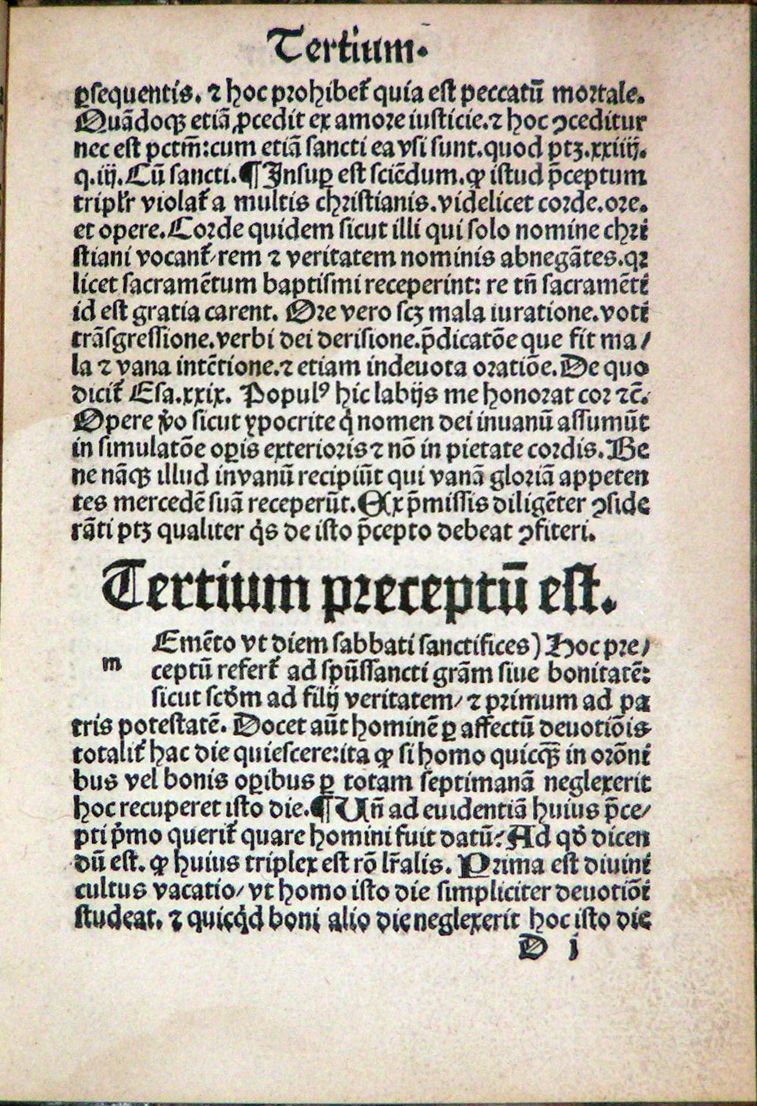 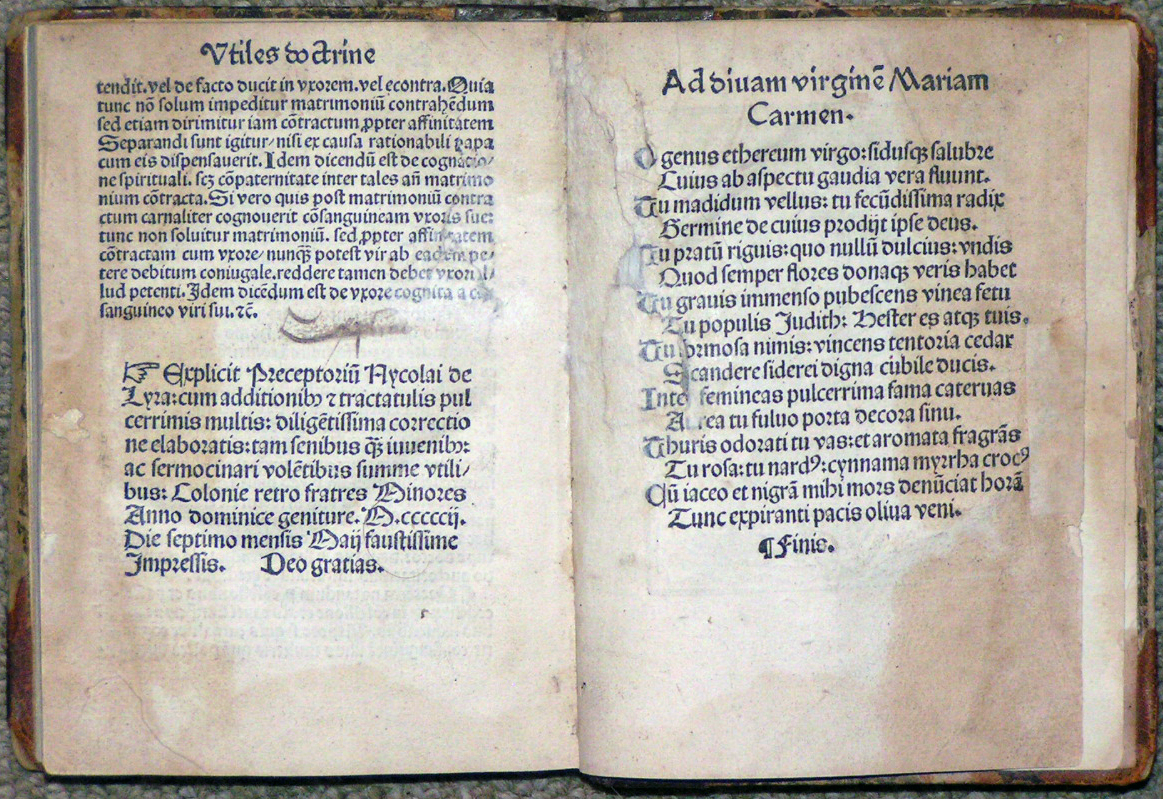 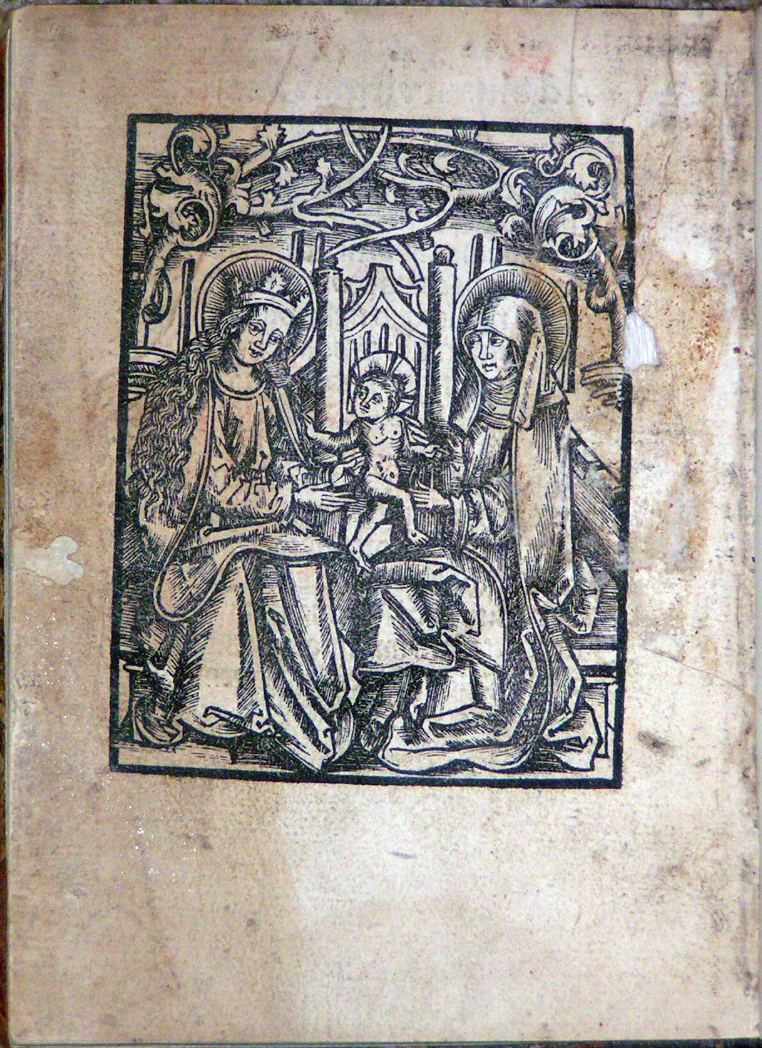 The printer's name is not mentioned, but it is likely the work of Martin von Werden. The Retro Minores press operated from 31 July 1497 to 1504. Proctor attributed the work of this press to Martin Von Werden. BMC, however, suggests that, as the Retro Minores used three of Heinrich Quentell's types and 2 of the same woodcuts, it might have been a branch of Quentell's business. However, following the custom of the time, Quentell and Zel each gave the location of their shop as retro fratres, behind the friars, and identified themselves as the printer. Books printed by von Werden between 1498 and 1506 do not bear his name. However, they do indicate they were produced at the same location as that used by Quentell and Zel, or, as is the case with this book, retro fratres Minores, behind the friars minor. After 1506, von Werden indicated both the location and his name. Von Werden used the same typed as Quentell and Zel, and reprinted woodcuts which originally appeared in their books. The book has been attributed to Nicolas of Lyra (1270-1349). In modern times it has been assigned it to Henry of Friemar, circa 1245-1340 (Cf. Buchberger. Lexicon f. Theol. u. Kirche. 2nd ed.). Nicolas of Lyra had the greater reputation and is known as one of the great Biblical exegetes. He emphasized the literal meaning of scripture and his work was a strong influence on Luther. Nicholas was a Franciscan. Henry of Friemar belonged to the same order as Luther, the Order of Hermits of St. Augustine. He was master in theology at the Univ. of Paris. Later he moved to schools at Prague in Saxony, ending his career as Provincial for his order in Thuringia and Saxony. Woodcuts on A2v and S8v. A woodcut of Mary, Queen of Heaven, handing the Christ Child to his grandmother, St. Anne, is printed twice. Over thirty spaces left for rubricated initial letters, which were never filled in. Bound 18th century calf corners & spine with marbled paper over boards rebacked with acid free brown heavy paper with slight faux raised bands, a long triangular piece (9x2x9cm) torn from marbled paper of front cover, smaller pieces torn from rear cover, worn through leather at corners, rubbed & scuffed, light blue speckled page edges, endpapers with stains from leather turn-ins, large but light dampstains throughout, tears in final two leaves repaired with translucent archival rag paper, worm hole from N2 through P4--also S3 through S8, title leaf and last leaf soiled. Collation: A8, B8, C4, D8, E4, F8, G4, H8, I4, K8, L4, M8, N4, O8, P4, Q8, R4, S8; complete. 112 leaves. OCLC shows no copies of the 1502 edition in the U.S. but does locate two in Germany and one in Netherlands.