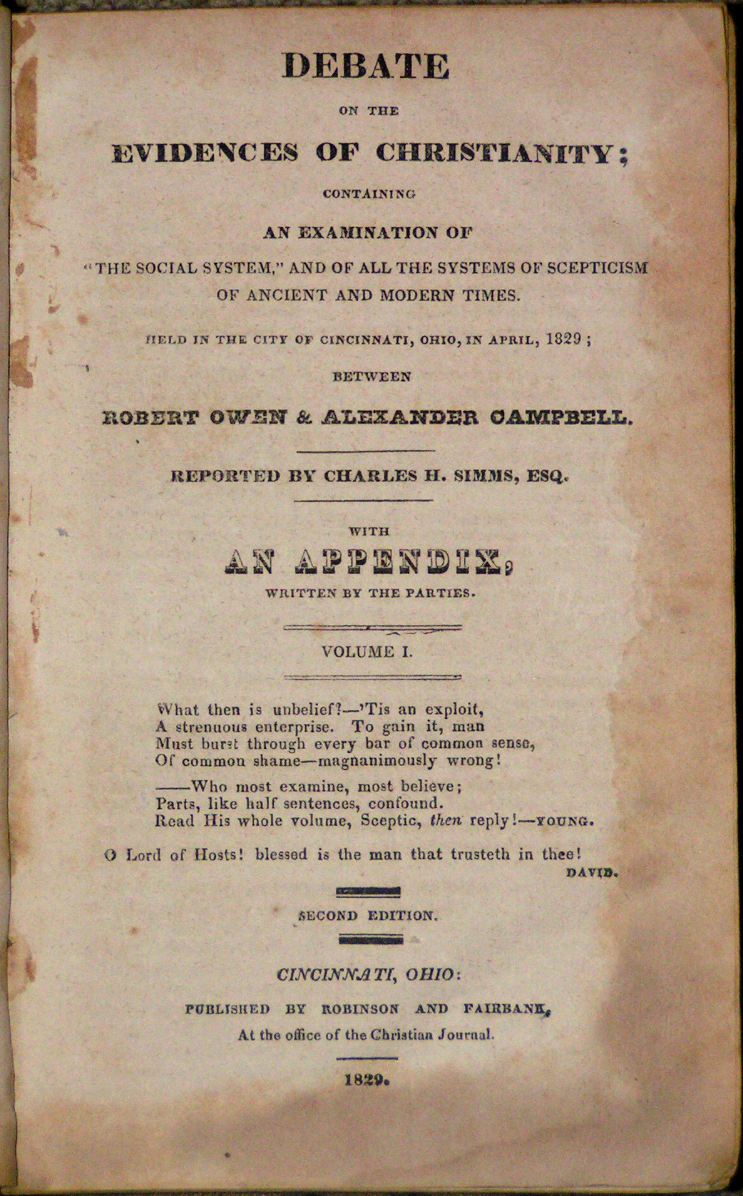 Debate on the Evidences of Christianity: Containing an Examination of

"Campbell & Owen Debate, Second Edition, Cincinnati, Ohio, 1829 CAMPBELL, ALEXANDER & ROBERT OWEN. Debate on the Evidences of Christianity; Containing an Examination of the ""Social System,"" and of all the Systems of Scepticism of Ancient and Modern Times. Held in the City of Cincinnati, Ohio, in April, 1829; Between Robert Owen & Alexander Campbell. Reported by Charles H. Sims, Esq. With an Appendix, written by the parties. Volume I. [& Volume II.] [9 lines of quotes] Second Edition. Cincinnati, Ohio: Published by Robinson and Fairbank, At the office of the Christian Journal. 1829. Octavo. $350.00 Bound full tree-calf with ornate gilt spine,, rubbed & scuffed some, bottom two corners bumped, yellow page edges, one slight start, 19th century college bookplate and presentation inscription from a Amos F. Hall dated 1855, lacks front free endpaper, library accession number in stamp & pen on front flyleaf, light tanning of pages, dampstain around edges of title and next few pages diminishing to a dampstain in the bottom margin only through page 50--same at rear of book, light foxing. Collation: [1]-216, 1-256. Pagination: (1) title, (1) copyright, [3]-5 Campbell's preface, [6]-7 laws of discussion, (1) blank, [9]-251 debate, (1) blank; (1) title, (1) blank, [3]-201 debate, (1) blank, [203]-215 review of Mr. Owen's book, [216]-236 Mr. Owen's appendix, [237]-263 Mr. Campbell's appendix, (1) blank, [265]-300 addenda. Amer. Imprints #29-39946. Second edition published the same year as the first (Bethany Va.). Robert Owen (1771-1858) Welsh socialist, pioneer of co-operation in industry, and philanthropist. He argued in A New View of Society (1813) that man's character is wholly determined by environment. He founded several communities of ""Owenites"" on co-operative principles in England and America including one in New Harmony, Indiana. At the age of 82 he took up Spiritualism. Alexander Campbell (1788-1866) one of the founders of the Disciples of Christ. With the aim of greater Christian union he rejected all credal formulas. He first began preaching in 1810 and organized the church at Brush Run, Pa. At the time he believed in the independence and congregational government of every local church and in toleration of infant baptism. After his marriage and birth of his first child, he studied the subject of infant baptism and decided against it. Campbell, his wife and father and mother were all re-baptized by a Baptist minister. He initially associated with the Baptists, but left them over differences of doctrine. He came to believe in baptism as necessary for the remission sins and the appropriation of God's promise of forgiveness, while Baptists considered the new life complete before baptism. ""He went about preaching where he was welcome, and debating with his opponents whenever he had the opportunity. He was a skilful debater on different subjects, and he did not hesitate to meet all comers. One of his most interesting debates was on religious skepticism with Robert Owen, the English Utopian. These debates were open to the public who attended in large numbers, and they added to the growing reputation of Campbell.""--Dictionary of American Biography, III:447. We are pleased to offer this handsome leather bound copy in full tree calf with gilt spine, of the Campbell-Owen Debate. (17202) "

Title: Debate on the Evidences of Christianity: Containing an Examination of

Debate on the Evidences of Christianity: Containing an Examination of