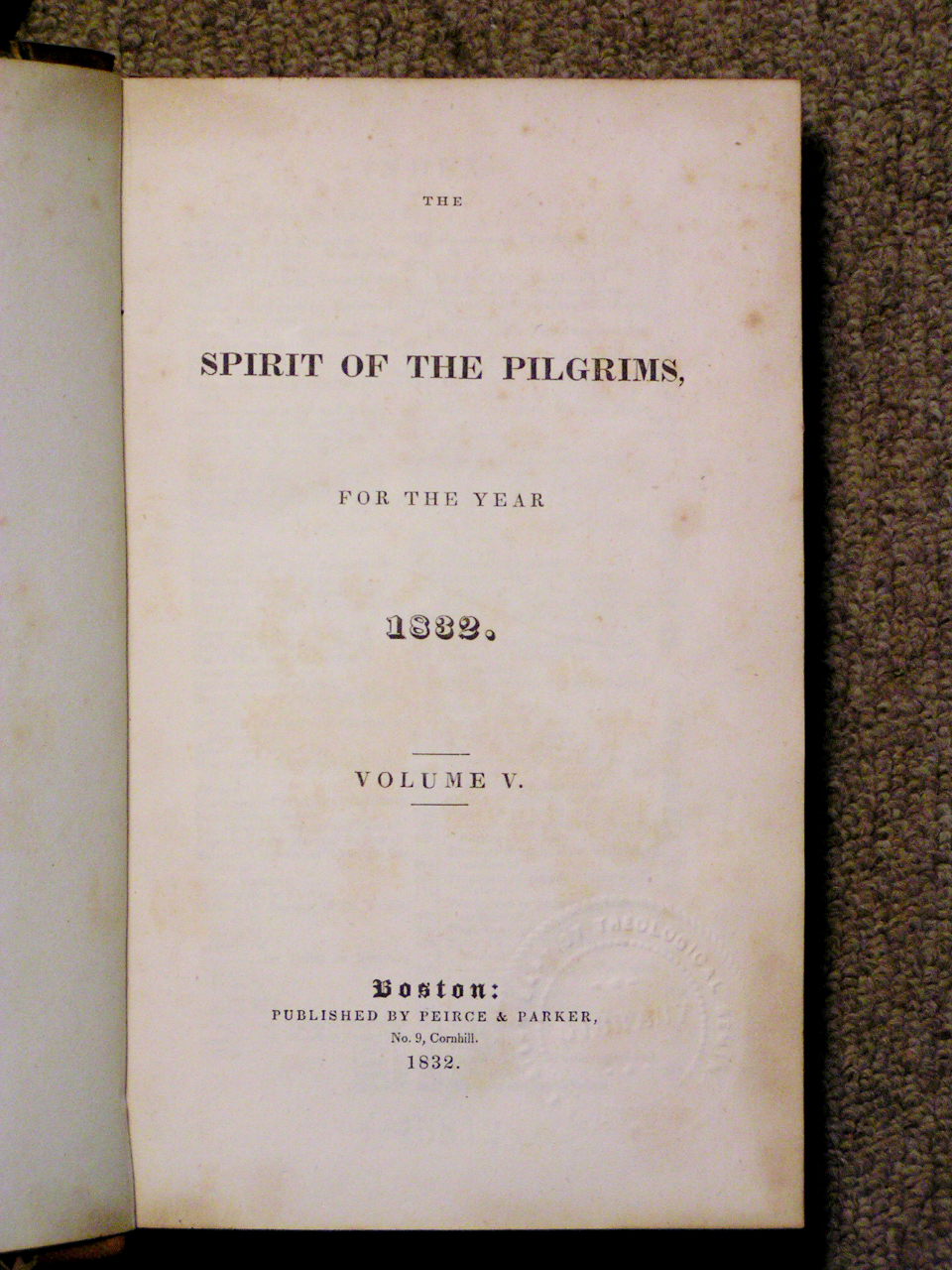 "Volume I, No. 1, January 1828 (pp1-7) issue of this periodical explained the reason for a new magazine: ""It has for some time past appeared exceedingly desirable, that there should be Published in Boston a periodical work, in which that portion of the community, usually denominated orthodox, can easily and frequently express those view of truth and duty, which, after a full and fair examination, are judged to be of great importance. At present, although there are several respectable religious magazines in our country, none of them can be made to accomplish all the beneficial ends which the interest of the church now require. After serious and prayerful deliberation, therefore, it has been determined to establish an new magazine."" The editor continues saying the Spirit of the Pilgrims is being established in the spirit of the Theological Magazine of New York in 1797 and The Connecticut Evangelical Magazine not long after. Speaking of the Unitarians, the editor states: ""Again; it is undeniable, that a large portion of the community has been totally deceived, in regard to the doctrines and preaching of the orthodox. Many have recently discovered the deception practiced upon them, and others are almost daily discovering it. Both classes wish to know how far they have been deceived...In this state of things, nothing can be more reasonable, than that the orthodox should explain their own faith; and that they should have the means of doing it conveniently and easily, in writing as well as in public discourses."" He continues: ""Secondly:--Unitarians have a magazine published here, upon which they spare no labor, and which is constantly employed in promoting their cause. We must have the means of meeting them on this ground... Thirdly:--There have been great accessions of numbers and strength to the body of orthodox Christian in Boston and the vicinity, within a few years past...these accessions of numbers and strength require additional means of improvement, of instruction... Fourthly:--The Unitarian controversy, as it is now conducted in Great Britain, Germany, and the United States, embraces nearly all the great points of fundamental truth and fundamental error...but, in order to make a proper use of advantages, as well as to correct misrepresentations, it Very nicely bound in calf spine and corners with marbled paper over boards, gilt lettering on black morocco title and volume labels on spine, top 1.5cm split at top of rear hinge, 5mm dia. piece chipped from top of front hinge, large piece chipped from top of spine but pasted back down, speckled brown page edges, library blind stamp on title page, library pocket & date due slip on rear endpapers, stamped library accession number on bottom of 3rd page, light foxing, otherwise very nice, good+ condition. Pagination: (1) title, (1) blank, (2) index, [5]-724pp. "