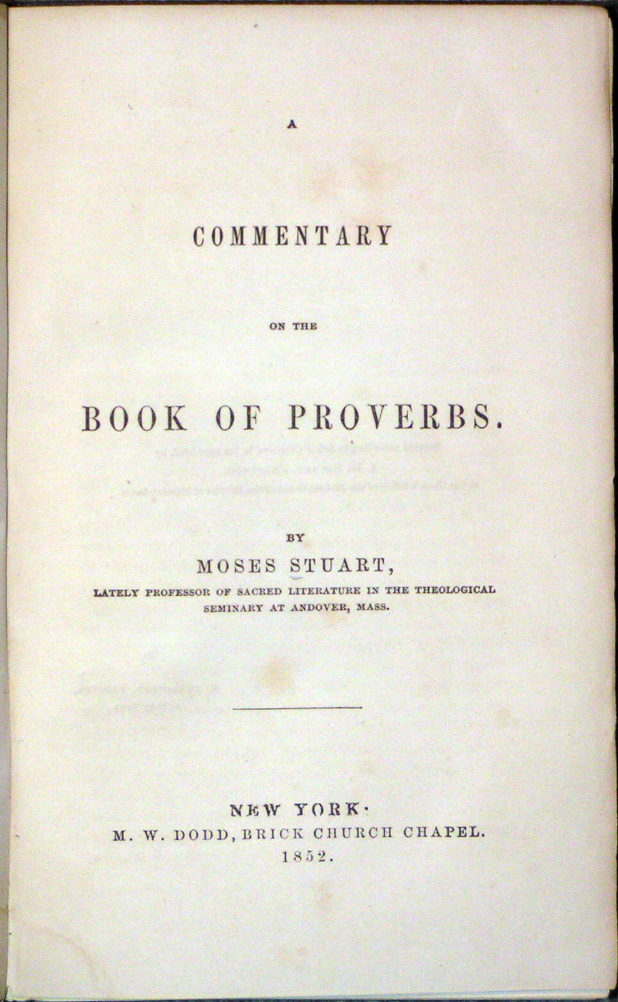 A Commentary on the Book of Proverbs. By Moses Stuart, Lately Professor of Sacred Literature in the Theological Seminary at Andover, Mass.

"Moses Stuart (1780-1852) American Hebraist & Biblical scholar, professor of sacred literature in Andover Theological Seminary 1810-1848. ""His first literary work was a Hebrew grammar, which was circulated among the students in manuscript because it was not possible to print Hebrew in this country at that time; when it was finally printed (1813), he was compelled himself to set up part of the type for lack of compositors equipped for the task; later editions long remained the textbooks for American students. To American he brought the knowledge of what was being done for Biblical scholarship in Germany, and thus founded in America the scientific study of Biblical archeology and linguistics. For his services in this department he has been called `the father of American Biblical literature.'""--New Schaff-Herzog Ency Rel. Knowl., XI:116. In a series of elaborate commentaries he showed how German scholarship had revolutionized the field of Biblical studies. ""Because he [Stuart] was so concerned with recovering the original meaning of the Scriptures, he devoted a great deal of his energy to the production of commentaries on various biblical books. Stuart's commentaries demonstrated his grasp of philological and grammatical tools of research. Although his conclusions always favored his conservative position, the commentaries represented a major advance over previous commentaries in the English language...""--Jerry Wayne Brown: The Rise of Biblical Criticism in America 1800-1870, pp99-100. We offer the First Edition of Stuart's Commentary on the Book of Proverbs. Bound publisher's dark brown cloth, spine ends chipped & frayed--consolidated with flexible book adhesive, rubbed through cloth along most edges of spine--edges of spine cloth pasted back down, frayed corners consolidated with book adhesive, yellow endpapers, light occasional foxing--heavier on first & last few pp. Collation: 1-366. Pagination: (1) title, (1) copyright & printer, [3]-10 preface, [11]-429 text, [430]-432 contents. "

Title: A Commentary on the Book of Proverbs. By Moses Stuart, Lately Professor of Sacred Literature in the Theological Seminary at Andover, Mass.

A Commentary on the Book of Proverbs. By Moses Stuart, Lately Professor of Sacred Literature in the Theological Seminary at Andover, Mass.