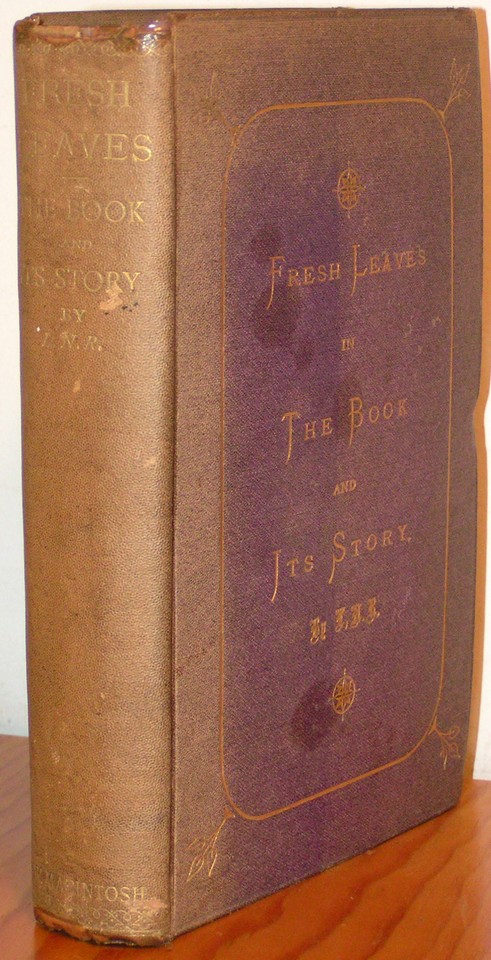 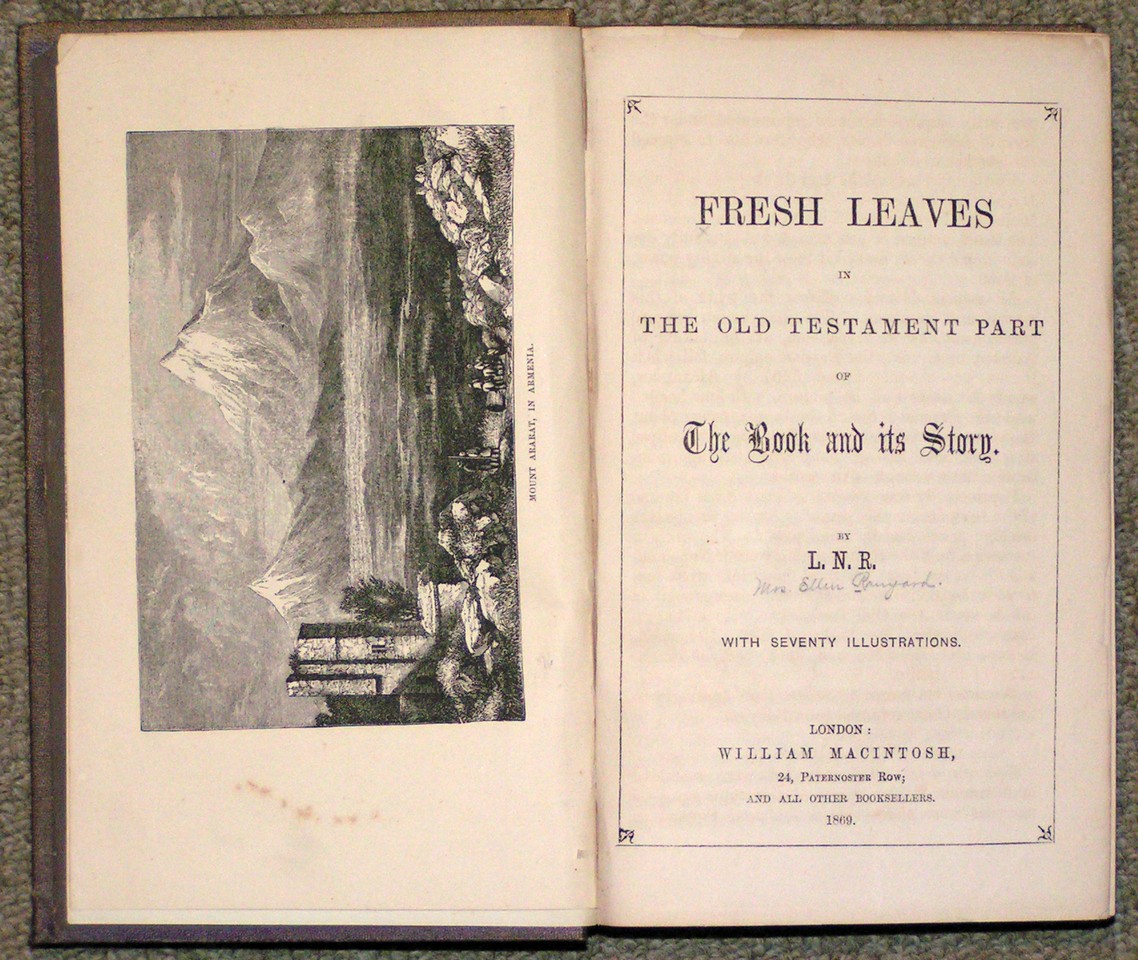 Fresh Leaves in the Old Testament Part [& New Testament] of the Book and its Story. By L.N.R. With Seventy Illustrations.

"Ellen Ranyard (1809-1879) was the daughter of a non-conformist cement maker, as a child becoming involved in visiting poor families. She established the Bible and Domestic Female Mission (known as the Ranyard Mission from 1917) in 1857. The mission became known for its ability to work in some of the most deprived areas of London. She developed ""Bible Women"" who were missionaries drawn from the neighborhoods they were to work in. They were given 3 months training in the poor law, hygiene and scripture. Their job was to sell Bibles and provide domestic advice to wives & mothers. She also developed ""Bible nurses"" who again were drawn from the poor neighborhoods, but were trained in London hospitals. Along with their religious tasks, their duties included referring patients to doctors and local hospitals, inspecting infants in mother's meetings, and encouraging medical self-help among the poor. ""[Mrs. Ranyard] was very much aware of the degree to which the poor looked after on another in emergencies and hoped to extend and improve these traditions with nursing assistance and advice.""--F.K. Prochaska: The Voluntary Impulse, Philanthropy in Modern Britain (1988) p.52. "" By 1867 there were 234 Bible women working in London. They were the first group of paid social workers in Britain."" ""Ellen Ranyard's contribution to the development of social work, community work and informal education has not been properly recognized. It might be that the locus within evangelicalism has tended to put some commentators off, but the way in which Ranyard recruited, trained and deployed working class workers was a significant landmark in the development of practice.""--Ellen Ranyard (""LNR""), Bible women and Informal Education (http://infed.org/mobi/ellen-ranyard-lnr-bible-women-and-informal-education/ accessed 8/21/14). We offer her work on the Old Testament written for the working man & woman. ""Those who have followed this volume in its course of monthly issue, will be aware of its intent and purpose. It directs to the Story of the Divine Book, as contained in itself, marks the inspired men who tell it, and shews how the separate books of the Old Testament are, as it were, built into one another, each one successively needful to the understanding of those which come after it. These Fresh Leaves have been issued in large print for those who do not read very easily, but who wish to be presented, when they sit down to read the Bible, with some thoughts and facts about each of its books, which shall help them to read it intelligently, not merely as a duty, and to perceive the bearing of its various parts upon each other. We have had some testimony already from "" Bible-women,"" ""City Missionaries,"" and ""Working-men,"" that it is the kind of book they wanted on a Sunday afternoon.""--Preface p.iii. The 70 illustrations include 18 full page plates and 52 printed in the text. The N.T. portion contain 6 full page plates and 1 printed in the text. Bound purple cloth faded to almost tan on spine and front cover, dulled gilt lettering on spine, brighter gilt lettering & simple decoration on front cover, sun-fade line on front cover, fraying & chipped spine ends & corners consolidated with flexible book adhesive, dark brown endpapers with 19th century library bookplate and their ""Withdrawn"" stamp over it, pages tanning but clean. Pagination: frontispiece, (1) title, (1) blank, [iii]-4 Preface, (1) list full page illustrations, (1) blank, [vii]-viii list of minor illustrations, [1]-352pp text, [353]-364 index, [1]-120 New Testament, [121]-124 index. "

Title: Fresh Leaves in the Old Testament Part [& New Testament] of the Book and its Story. By L.N.R. With Seventy Illustrations.

Fresh Leaves in the Old Testament Part [& New Testament] of the Book and its Story. By L.N.R. With Seventy Illustrations.