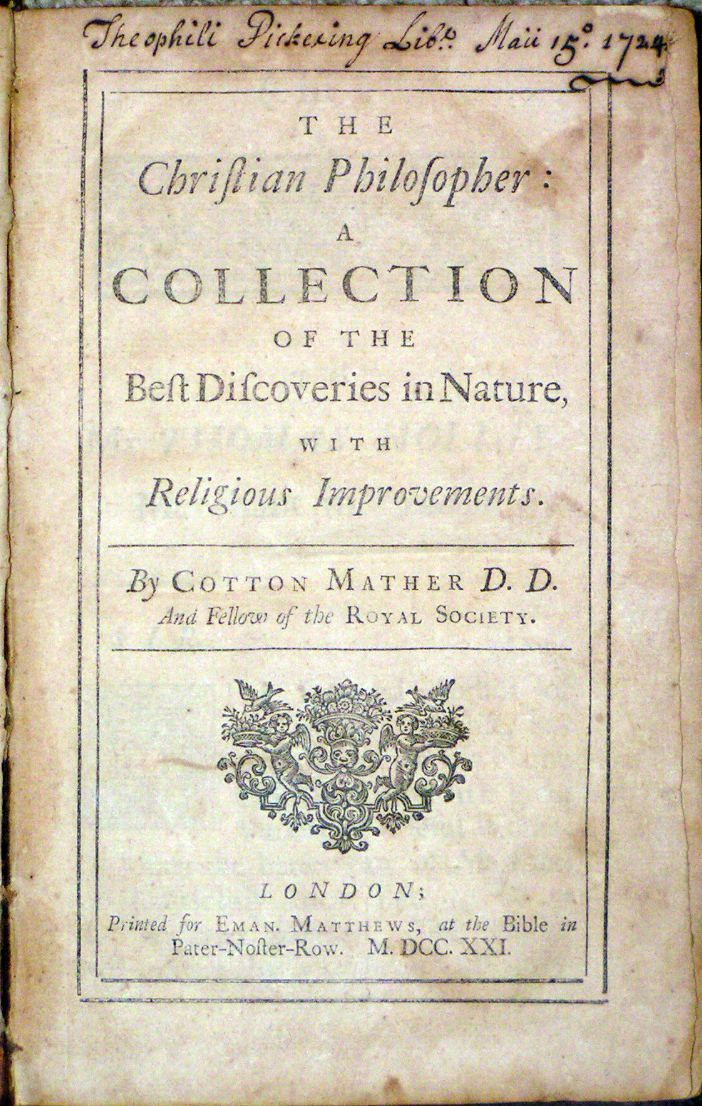 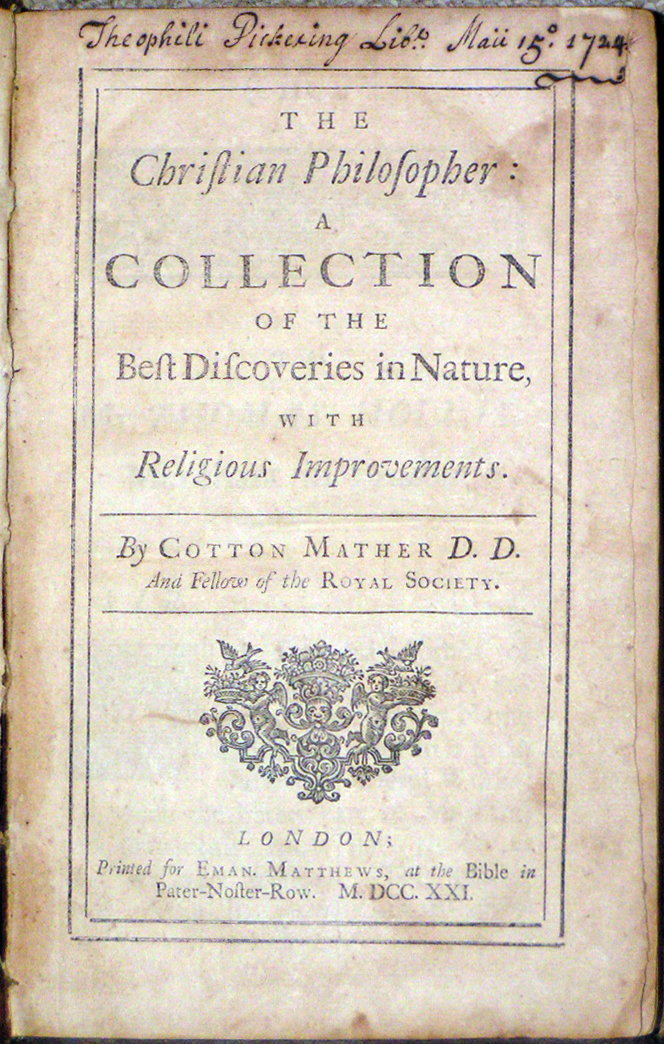 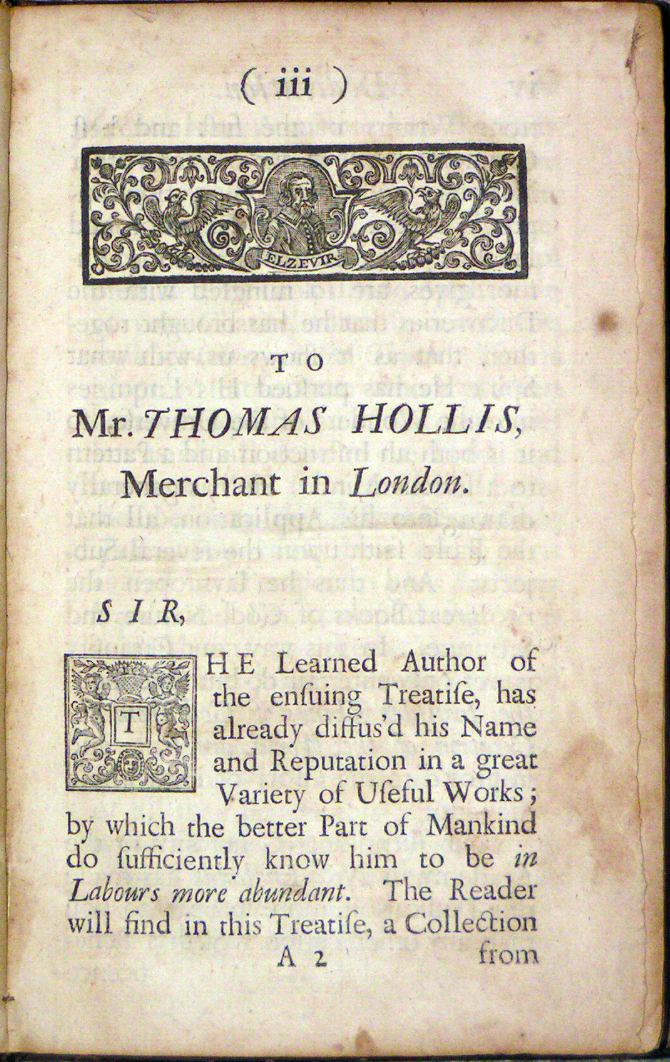 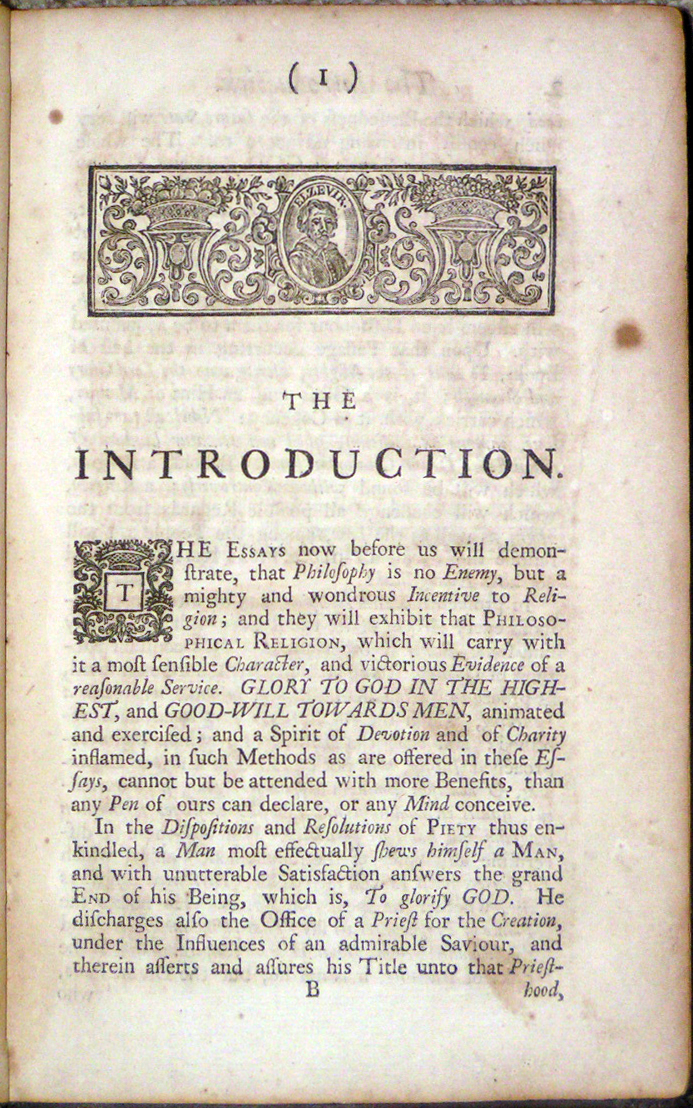 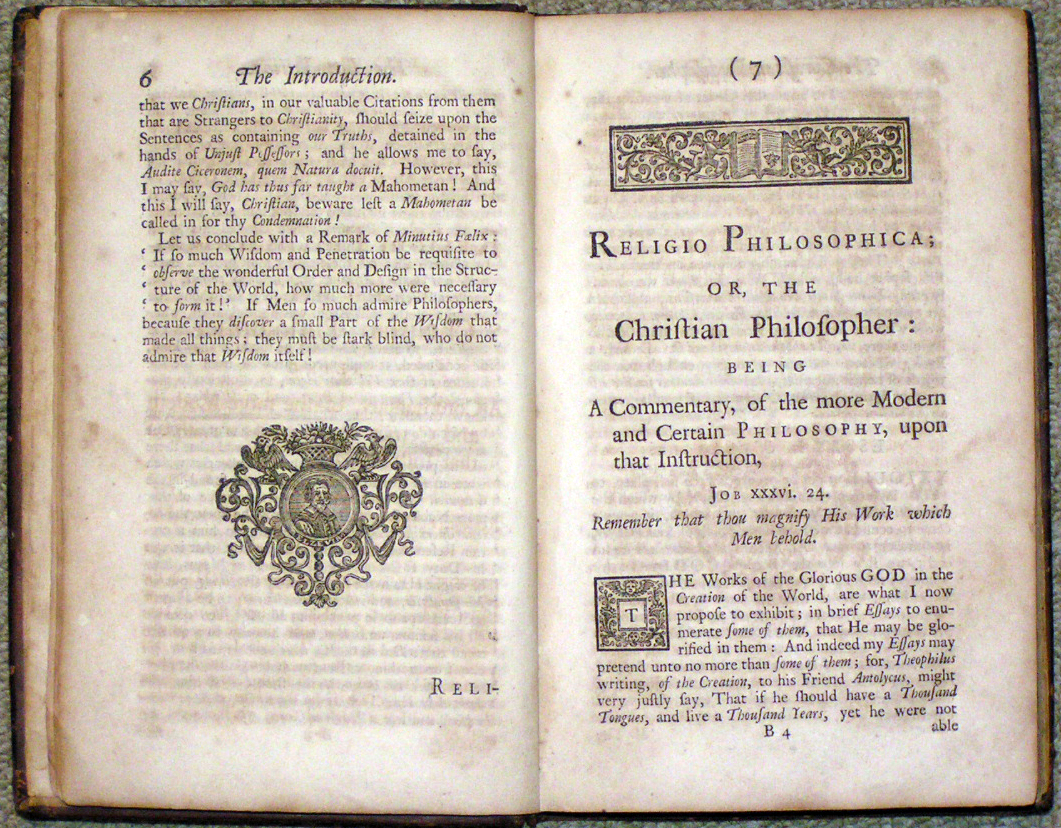 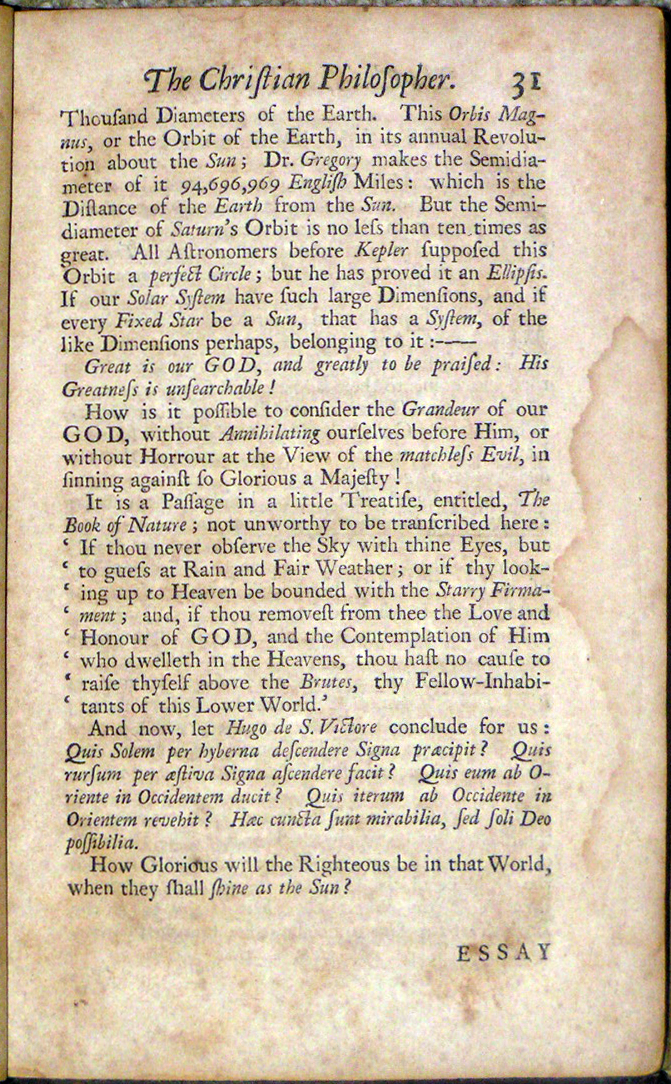 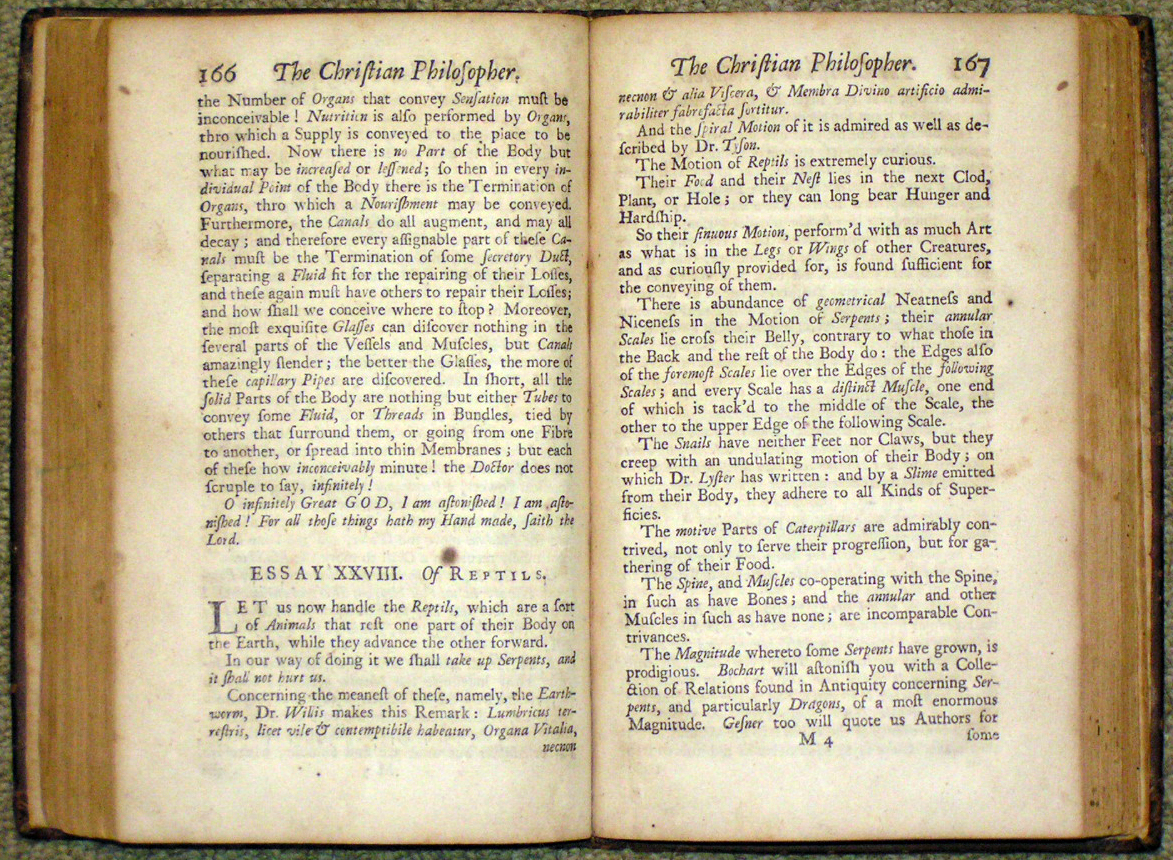 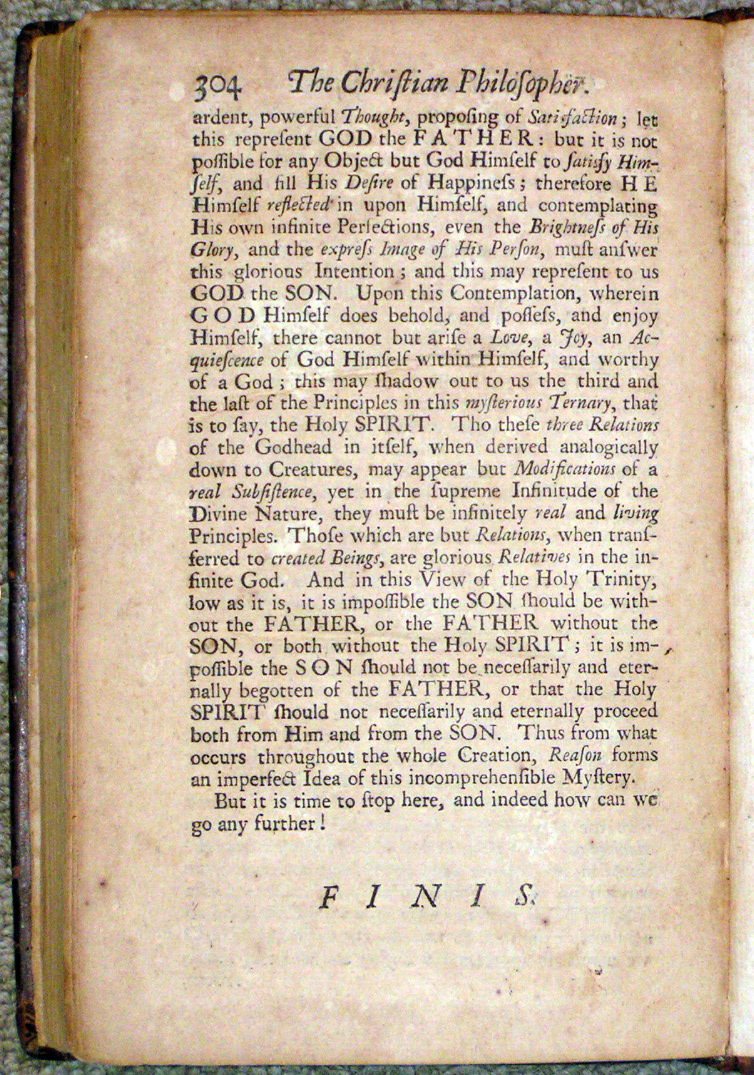 The Christian Philosopher: A Collection of the Best Discoveries in Nature, with Religious Improvements. By Cotton Mather D.D. And Fellow of the Royal Society. [printer's device]

"Cotton Mather (1662/63-1727/28) Puritan clergyman, scholar and author, he was the eldest son of Increase Mather. ""Cotton Mather was the most influential writer of his generation in America. He brought the puritan period of New England history to an end and started towards the evangelical pietism of the eighteenth and nineteenth centuries. His vision of Christian religion flying to America inspired nineteenth-century writers on America's manifest destiny..."" Re his work with natural science: ""Many of Mather's letters to England were about the natural sciences. In 1712 he sent the first of several accounts of unusual natural phenomena to John Woodward, a prominent English geologist. He followed up with letters addressed to John Waller, secretary of the Royal Society, with the hope that they be published in the society's Philosophical Transactions. From 1712 to 1724 Mather sent a total of eighty-two such letters, known collectively as `Curiosa Americana'. Many were printed in the Transactions. Mather made no secret of his wish to be included among the circle that made up the Royal Society, and was elated when news came of his election to the fellowship in 1713. Thereafter with great pride he put FRS after his name. In 1714 he sent to London a large manuscript epitomizing the science of the day that was published in 1721 as The Christian Philosopher. The chapter on astronomy, according to a modern historian, is `The finest example of how Newtonian Science came to America and was disseminated' (Theodore Hornberger in Holmes, 1.137).--quotes from: Michael G. Hall, `Mather, Cotton (1663-1728)', Oxford Dictionary of National Biography, Oxford University Press, 2004; online edn, Sept 2013 [http://www.oxforddnb.com/view/article/18321, accessed 18 May 2016]. Bound full calf Cambridge paneled style binding with darkened center panel, slight raised bands, rubbed & scuffed, leather splitting along top 6cm and bottom 10cm of front hinge but still holding well, corners bumped and starting to wear through, surface worm track on rear cover, medium to heavy foxing with some lighter pages, scattered dampstains throughout, marginal only silverfish damage outside edge of pp 119-132. Collation: A4, B-U8. Pagination: (1) title, (1) blank, [iii]-vi Dedication by Tho. Bradbury, (1) An Index (i.e., contents), (1) publisher's ad, 1-304pp. Octavo, 21.2 x 13 x 3cm. Holmes: Cotton Mather 52-A; Sabin #46253."

Title: The Christian Philosopher: A Collection of the Best Discoveries in Nature, with Religious Improvements. By Cotton Mather D.D. And Fellow of the Royal Society. [printer's device]

The Christian Philosopher: A Collection of the Best Discoveries in Nature, with Religious Improvements. By Cotton Mather D.D. And Fellow of the Royal Society. [printer's device]