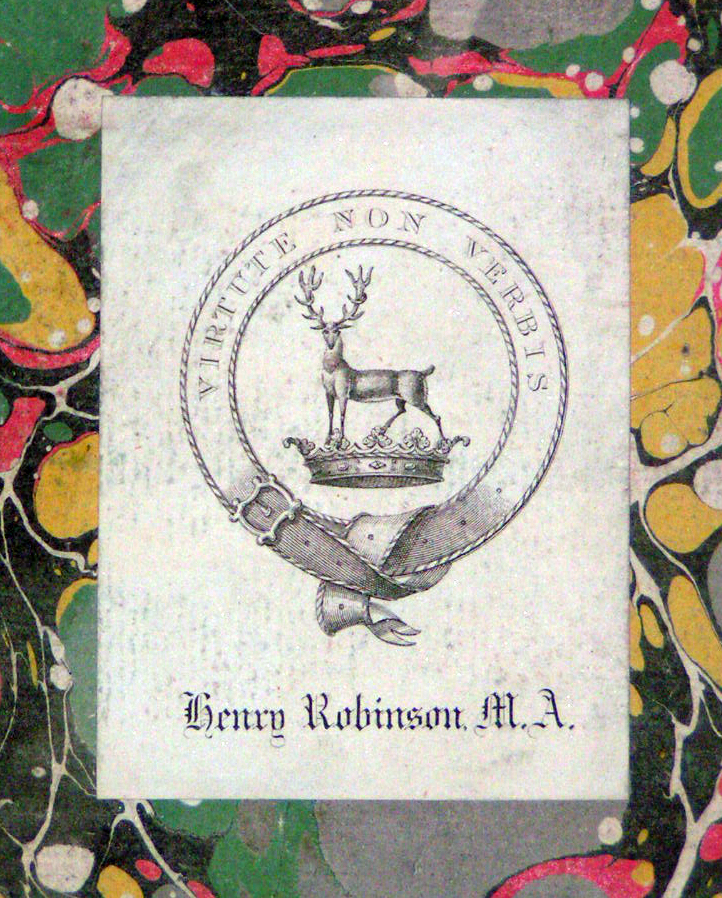 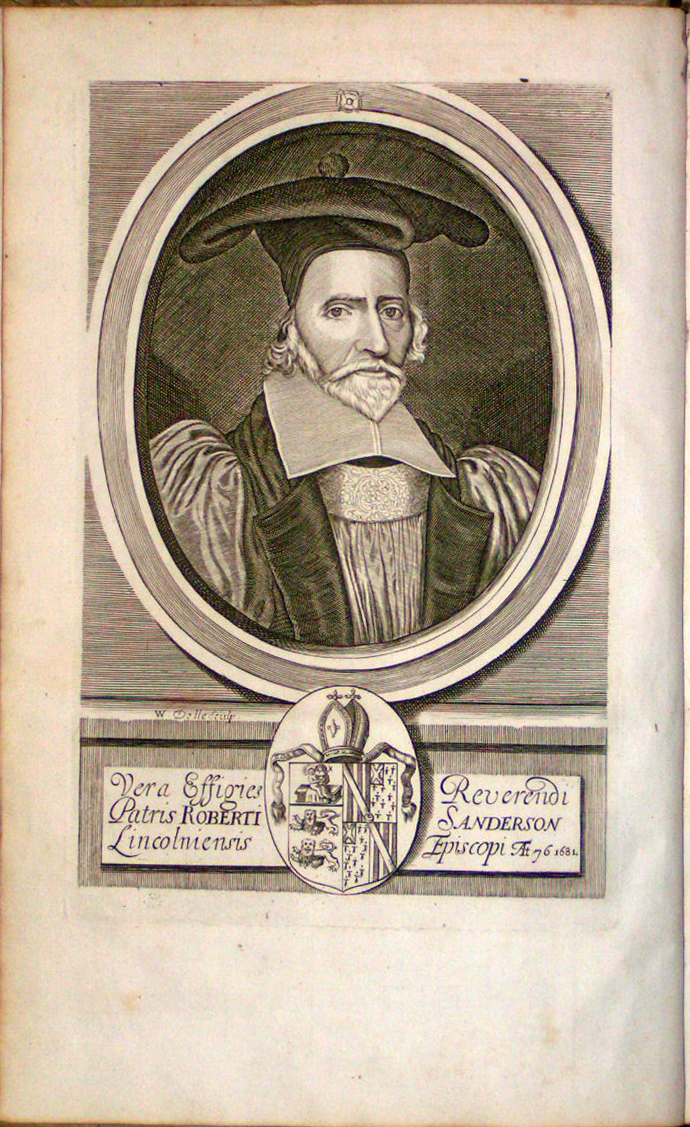 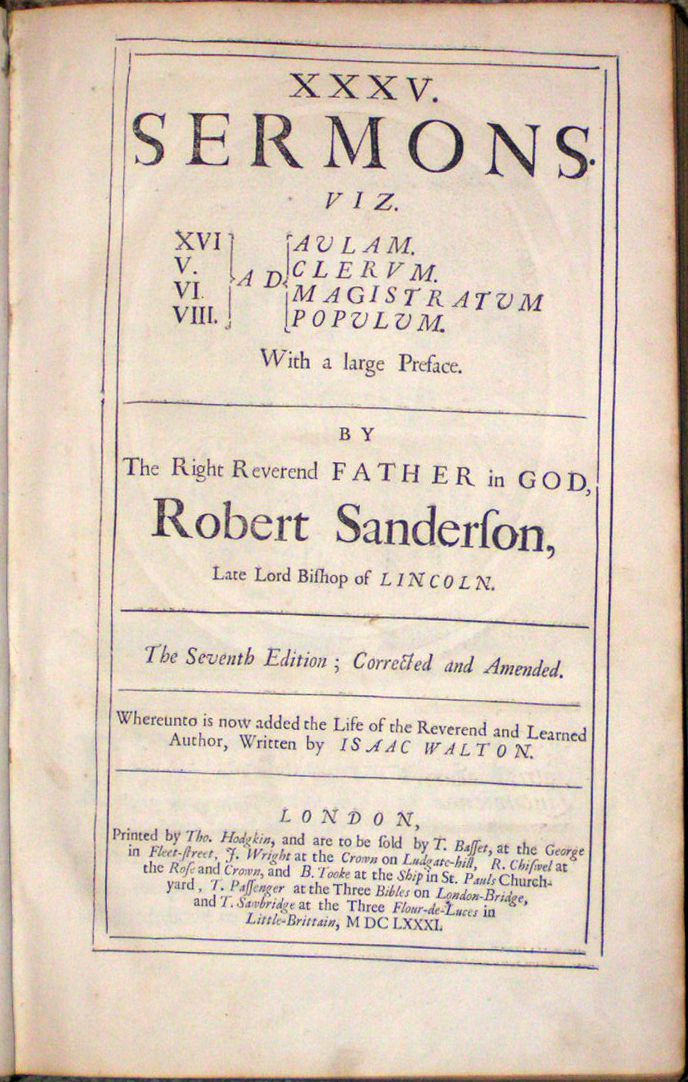 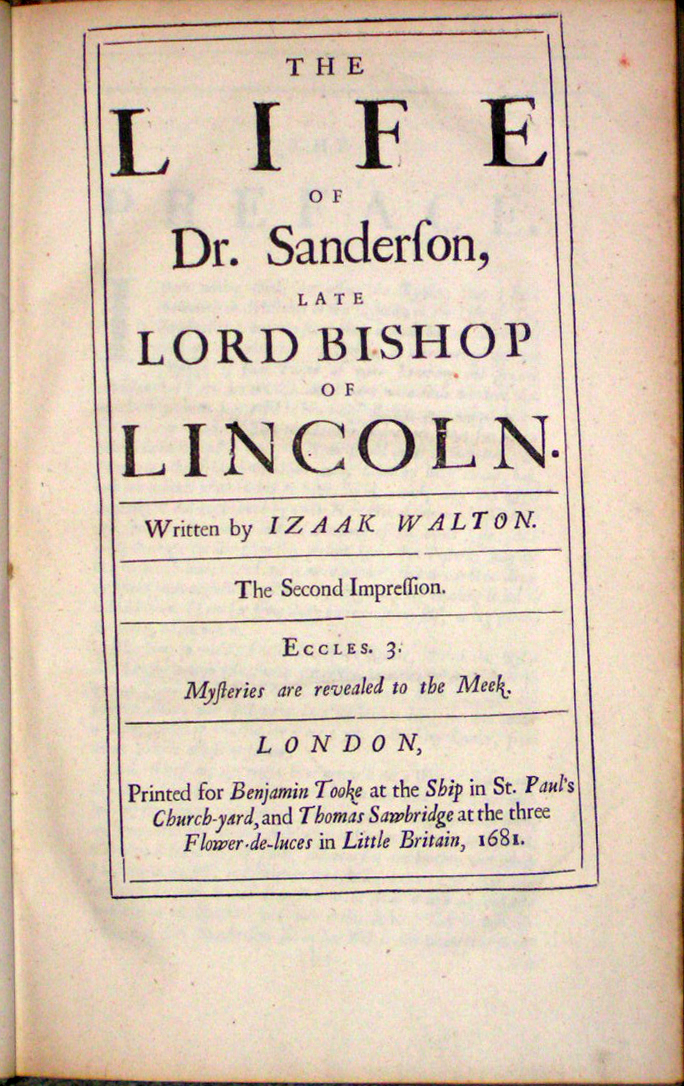 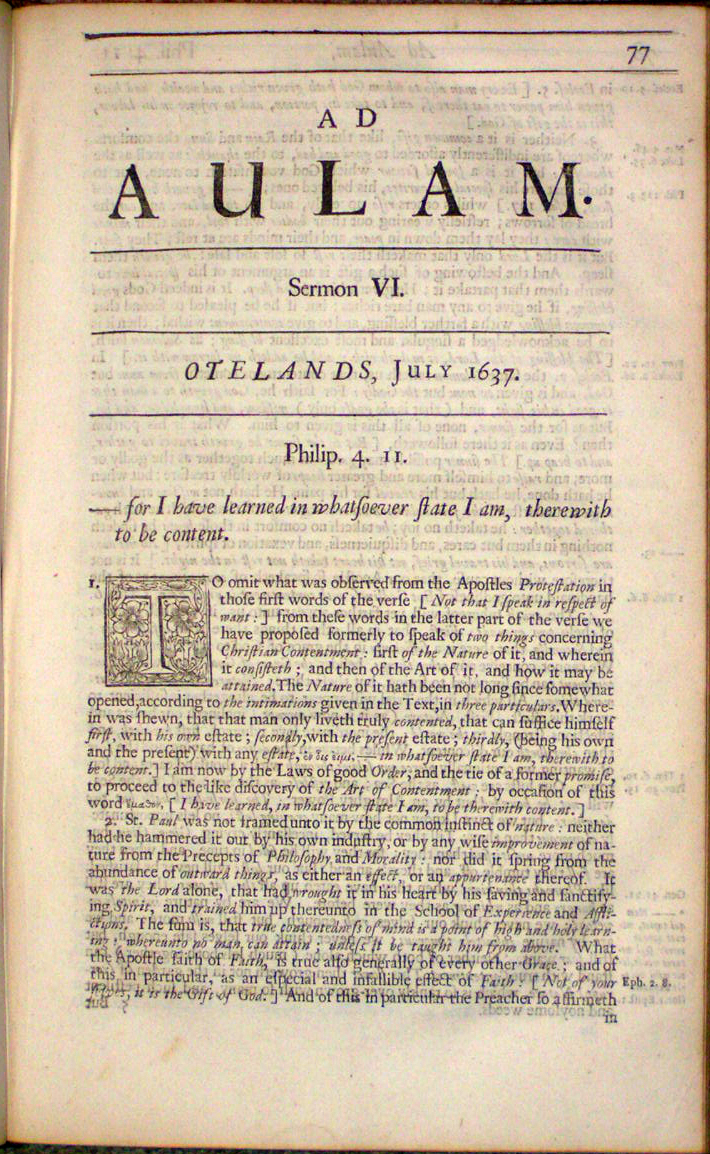 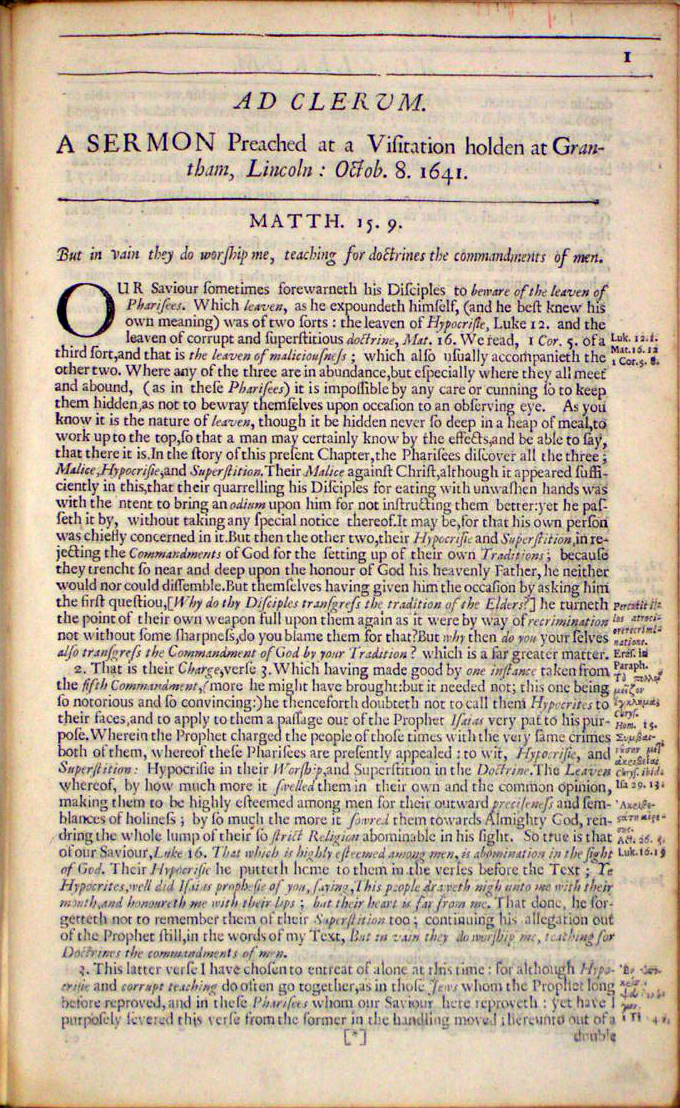 "Robert Sanderson (1587-1662) an English prelate, consecrated Bishop of Lincoln 1660. ""A doctrinal Calvinist, Sanderson had tried to resolve the controversy created by Richard Mountague's books in the mid-1620s by offering a slight alteration of the sublapsarian doctrine of predestination. Nevertheless, he insisted that the Church of England held that divine act of election was entirely gratuitous and to suggest otherwise was `quarter-Pelagian and Arminian novelty' (Works, 5.277). Marginal notes condemning the Arminians and `their Semipelagian subtilties' continued to appear in all editions of his sermons until 1657, and vigorous efforts in the late 1650s by Henry Hammond, Thomas Pierce, and others to change his mind had little success. Sanderson's soteriology, his denunciations of usury and idleness, and his support for the reformation of manners show that he had much in common with puritans. Izaak Walton's biography of Sanderson wholly ignores his Calvinism, his agreement with puritans on many issues, and his quarrels with Hammond and the churchmanship that Hammond and his friends represented. However, throughout his long career he rejected puritan arguments against ceremonies, probably in part because of his observation of the actions of John Cotton and his followers at nearby Boston. Sanderson, deeply concerned to retain protestant unity against Rome, was an anti-puritan in the Whitgiftian mould, an excellent example of the way `that even men who shared great tracts of ideological terrain with the Puritans could end up hating them with a passion' (Lake, 115). In 1655 and 1657 he wrote strongly worded prefaces to collections of his sermons that accused presbyterians and Independents of having opened the door first to sectarianism and thus to `popery' or atheism. Acknowledging that this had not been their intention, he nevertheless concluded that `The Master in the Fable did not well to beat his Maid for serving him with thin Milk, when it was his own Cow that gave it' (XXI Sermons, 1681, sig. a1r).... Sanderson's reputation for judiciousness (and doubtless his theological stance) led to a seat in the Westminster assembly, which he never occupied.... According to The Spectator, Sanderson's sermons, along with those of Bull, South, Barrow, and Tillotson, continued to guide preachers in the eighteenth century (Spurr, 392).""--J. Sears McGee, `Sanderson, Robert (1587-1663)', Oxford Dictionary of National Biography, Oxford University Press, 2004 [http://www.oxforddnb.com/view/article/24627, accessed 12 Jan 2015] Quotes from Allibone re Sanderson: ""That clear and solid man, Mr. Sanderson. None states a question more punctually, resolves it more satisfactorily, answers all objections more fully.""--Bishop Prideaux. ""I carry my ears to hear other preachers, but I carry my conscience to hear Mr. Sanderson, and act accordingly.""--King Charles I. ""Dr. Sanderson, who stands at the head of all casuists, ancient and modern, was frequently consulted by Charles I.... His Sermons still maintain their reputation for clearness of reason, and a purity of style which seems to be the effect of it."" ""There are no sermons more valuable for study, or more to be recommended to a young divine for their sound doctrine and admirable matter, than Bishop Sanderson's""--Irish Eccles. Journ., Dec. 29, 1840. Bound full vellum red gilt morocco title label, bottom 3cm of vellum along front hinge is starting to split, vellum soiled some, title label scuffed and chipped a bit at edges, marbled endpapers, light damp stain in bottom margin of 34 leaves, p. 23 has bottom margin corner torn away, large but light ink stain on p. 93, light occasional foxing, contents clean. Engraved portrait of Sanderson facing the title, a few woodcut initial letters. Collation: frontispiece facing title, title leaf, dedication leaf, title leaf, (b)-(h)2, i-q2, title leaf, A2-4, a-b4, B-Ss4, A-D4, E-G2, B-Ii4, Kk2, Ll-Ss4, [*]-[***]2. Pagination: (1) title, (1) blank, (2) dedication, (1) title, (1) blank, (2) preface signed I.W., 1-46 Walton's Life of Sanderson, 43-50 [i.e, 47-50] Dr. Pierce's letter to Walton, 51-53 Bp. of Lincoln's letter to Walton, (1) blank; (1) title page, (1) blank, (10) preface, (11) contents, (1) blank, 1-313, (1) blank, (6) scripture table; (31) preface signed by Botheby Paynell, (1) blank, (11) contents, (1) blank, 1-314, (5) scripture table, (1) blank, 1-12 extra sermon. Pagination is close to Online ESTC Citation No. R21088. Final 12pp is also listed separately as Citation No. R236854. Folio, 32.5 x 21.2 x 5.2cm. (17822) "

Publisher: London,, Printed by Tho. Hodgkin, and are to be sold by T. Basset, at the George in Fleet-street, J. Wright at the Crown on Ludgate-hill, R. Chiswel at the Rose and Crown, and B. Tooke at the Ship in St. Pauls Church-yard, T. Passenger at the Three Bibles on Lond: MDCLXXXI. [1681] Folio. 1681