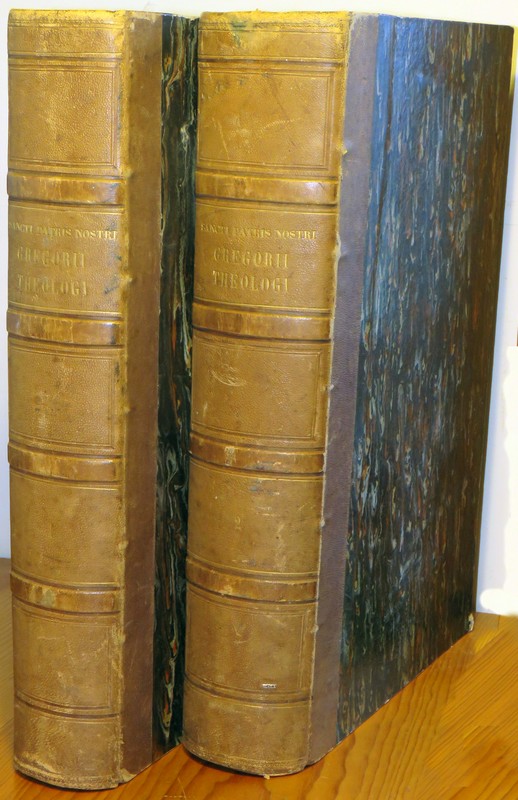 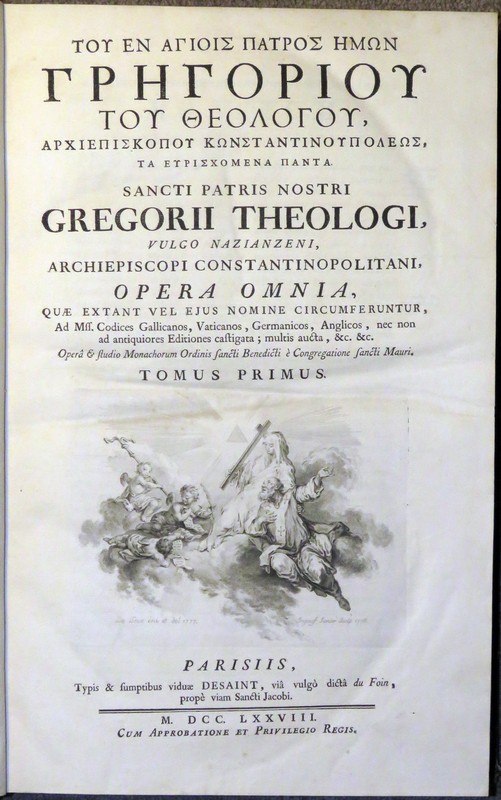 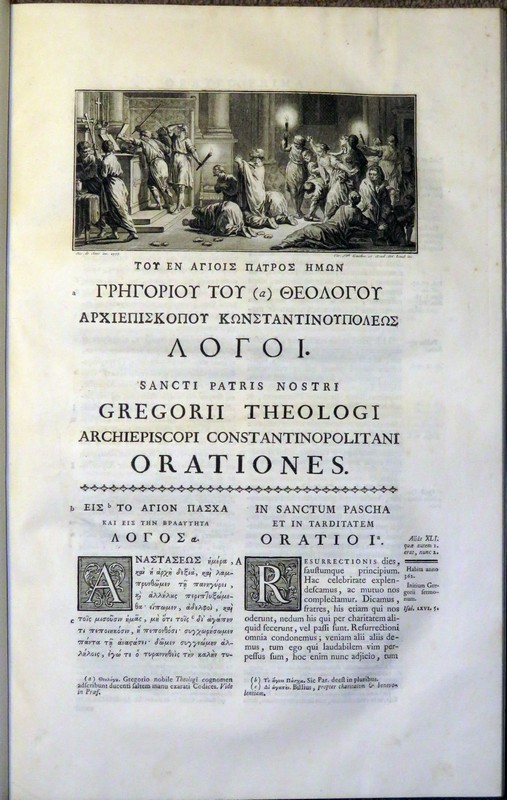 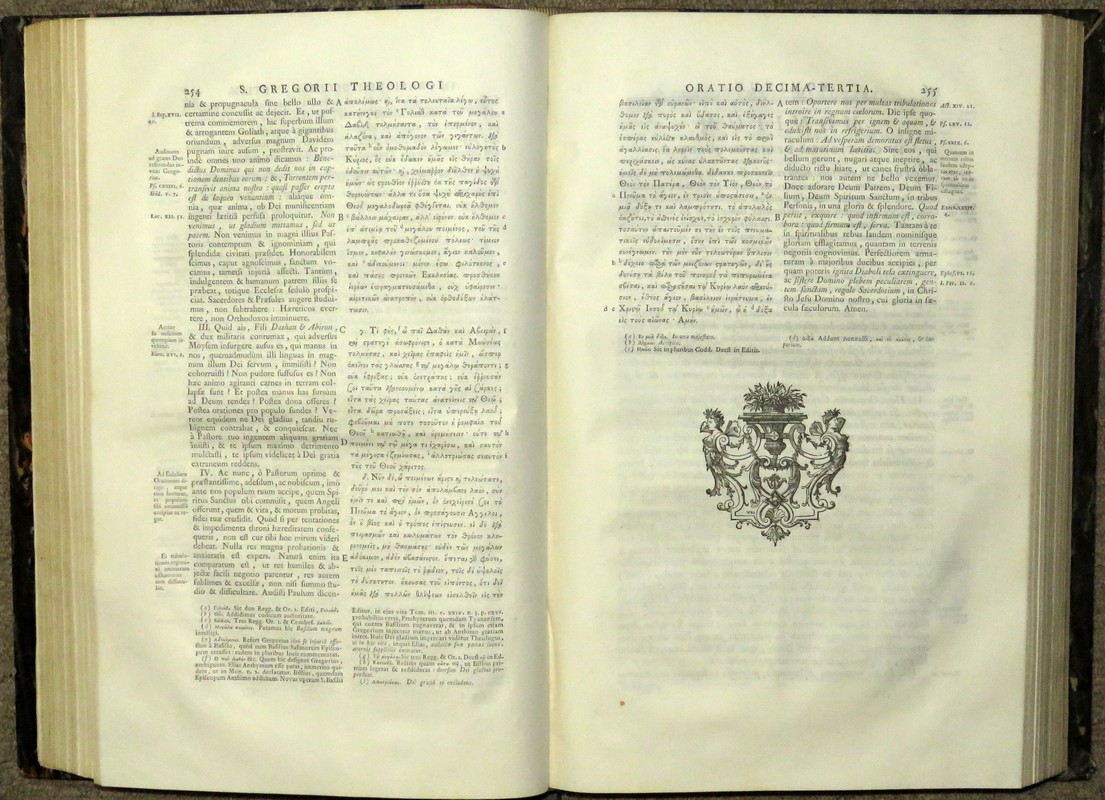 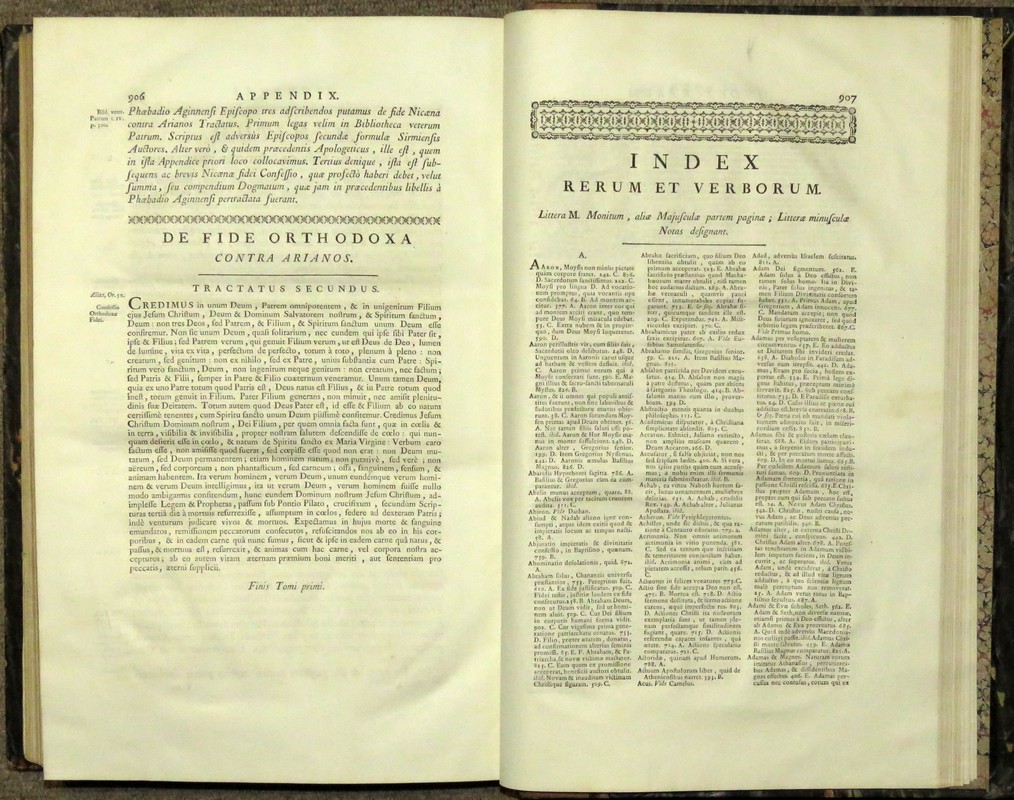 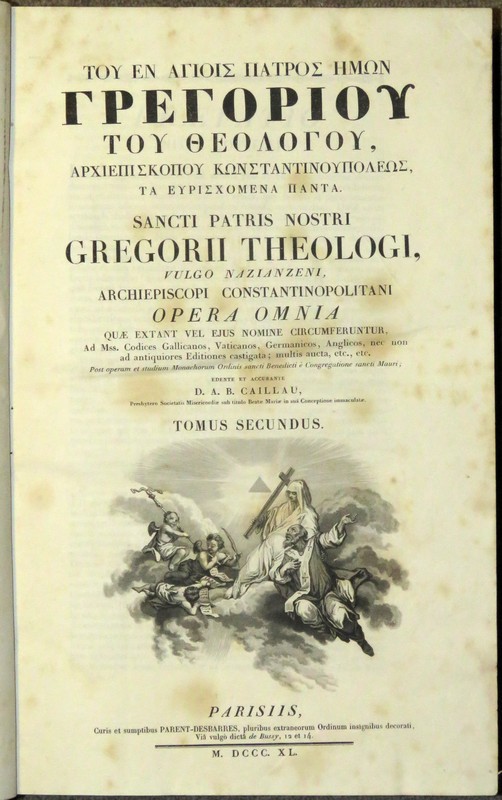 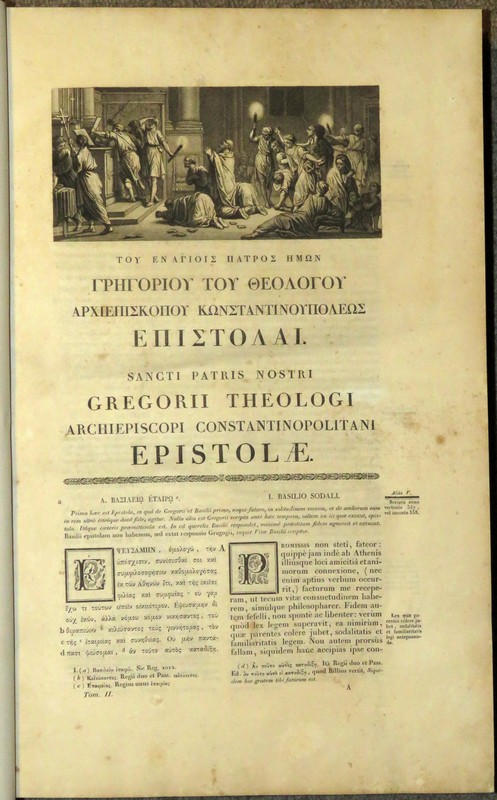 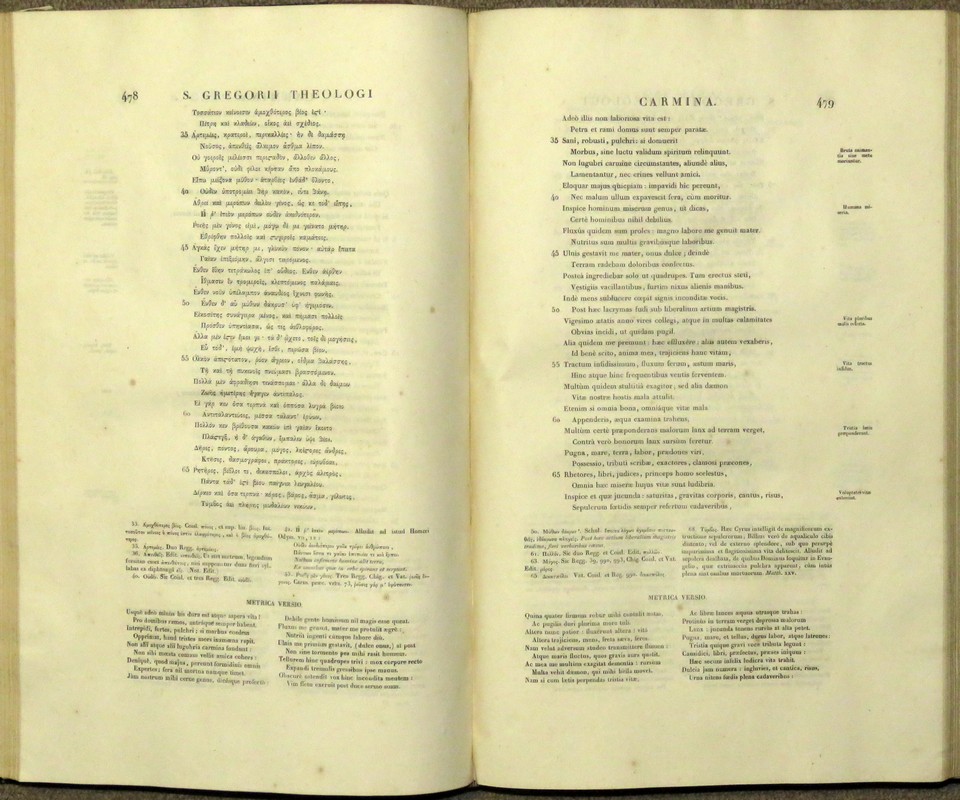 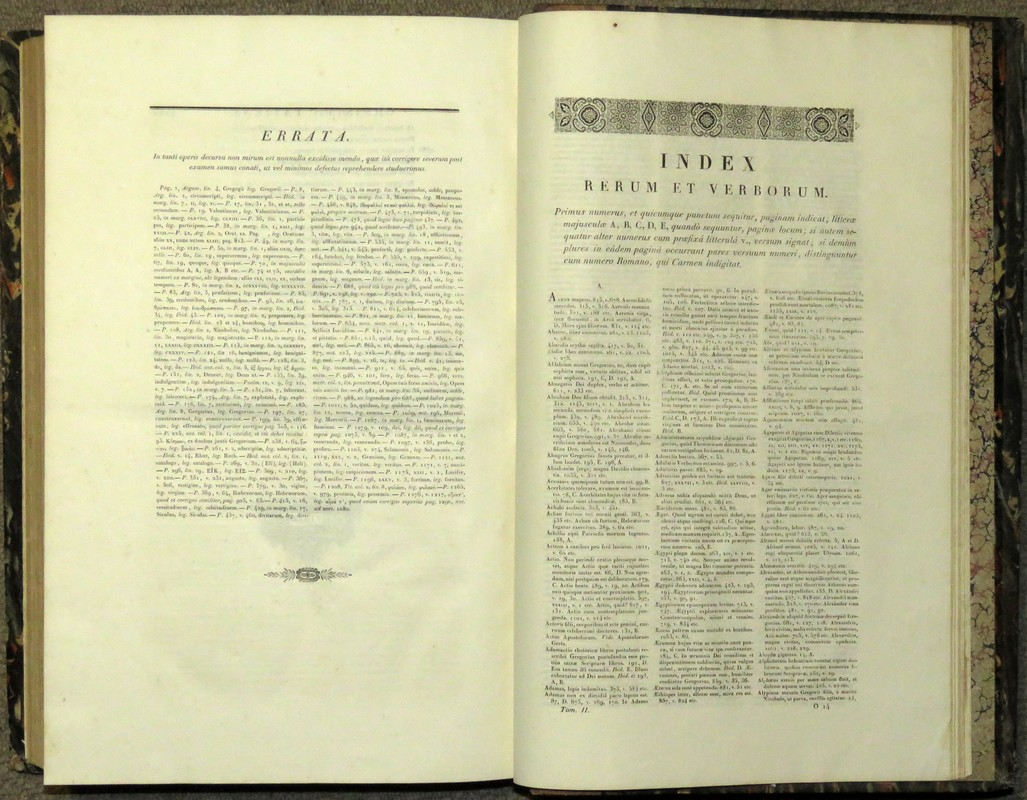 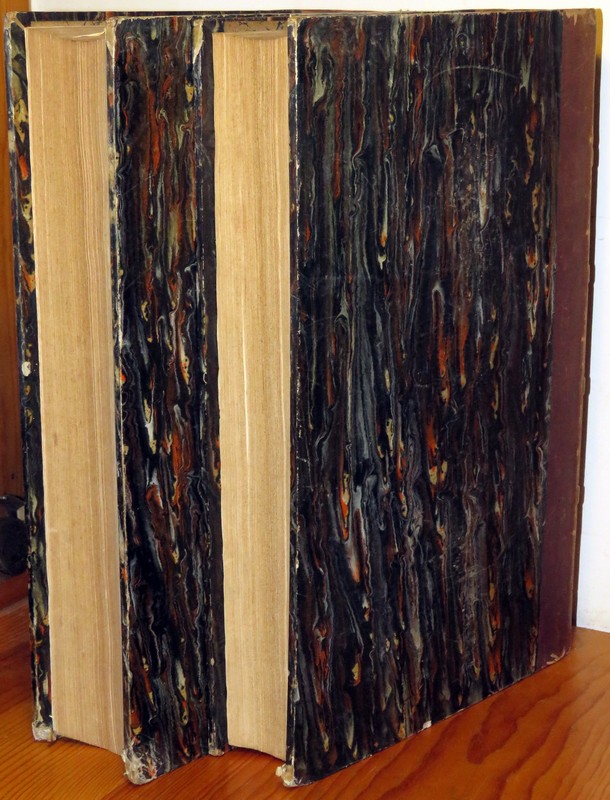 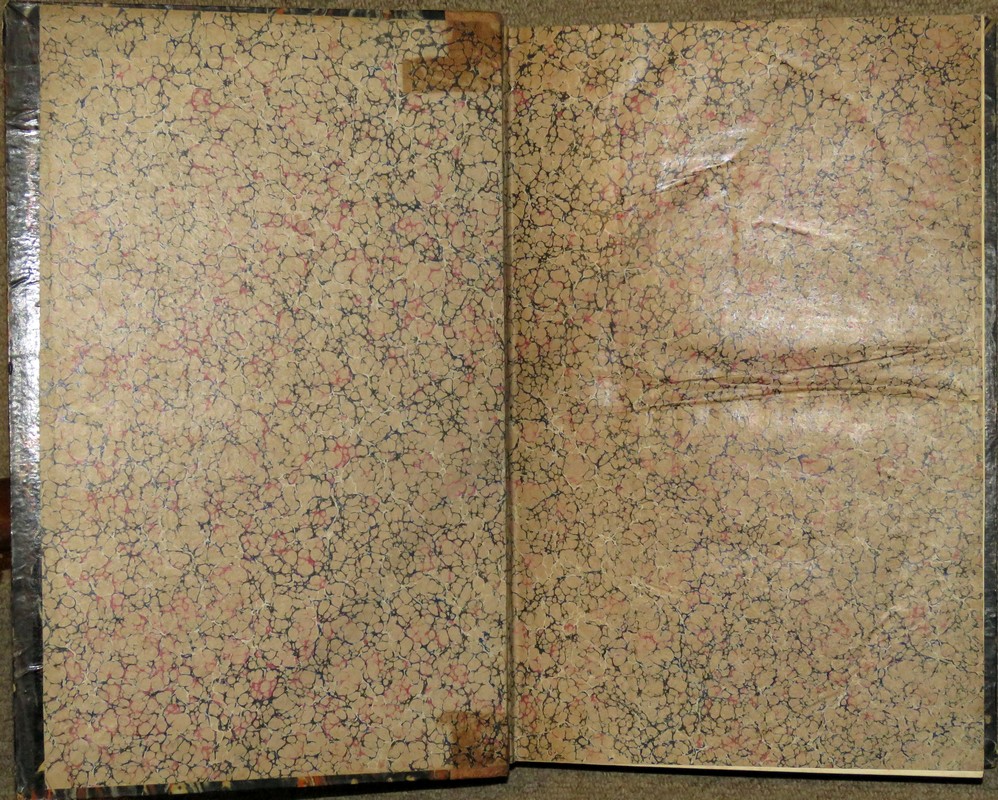 By: GREGORY OF NAZIANZUS, Saint.

"Gregory of Nazianzus (329-389) ""The Theologian,"" one of the four great fathers of the Eastern Church. ""He was the sone of the Bishop of Nazianzus, in Cappodicia (also 'Gregory') and studied at the university of Athens where he was a contemporary of St. Basil... Under pressure and against his will he was ordained priest (?c. 362)... Until his father's death in 374 he remained at Nazianzus to help his father... In 379 he was summoned to Constantinople, where his eloquent preaching in the Church of the Anastasis was a great influence in restoring the Nicene Faith and leading to its final establishment at the Council of Constantinople in 381. During the Council he was appointed Bishop of Constantinople, be he resigned the see before the end of the year, retiring first to Nazianzus and later to his own estate, where he died. His more important writings include his ""Five Theological Orations' which date from his Constantinopolitan period and contains an elaborate treatment of the doctrine of the Holy Spirit; the ""Philocalia,' a selection from writings of Origen which he compiled in conjunction with St. Basil; several important letters against Apollinarianism; and a large collections of poem.""--The Oxford Dictionary of the Christian Church, (1963) pp587-8. Gregory was called to Constantinople by a the small and depressed remnant of the orthodox party in Constantinople to lead the fight for the Nicene faith against Arianism. ""Once arrived in Constantinople, he laboured so zealously and well that the orthodox party speedily gathered strength... Among the hears of Gregory were to be found, not only churchmen like Jerome and Evagrius, but also heritcs and pagans; and it says much for the sound wisdom and practical tact of the preacher that he set himself less to build up and defend a doctrinal position than to urge his flock to the cultivation of the loving Christian spirit, which cherishes higher aims than mere heresy hunting or endless disputation. Doctrinal, nevertheless, he was, as is abundantly shown by the famous five discourses on the Trinity, which earned for him the distinctive appellation Theologian. These orations are the finest exposition of the Catholic doctrine of the Trinity as conceived by the orthodox teachers of the East... There is perhaps no single book in Greek patristic literature to which the student who desires to gain exact and comprehensive view of Greek theology can be more confidently referred.""--The Encyclopædia Britannica, 11th Edition, XII:563 We offer the last critical edition Gregory's Works. ""The edition of the Opera by Clemencet (vol. i., Paris, 1778) and Caillau (vol. ii., ib. 1840), supersedes all earlier collections and was reproduced in MPG, xxxv.-xxxviii.""--F. Loofs in The New Schaff-Herzog Encyclopedia of Religious Knowledge, V:72 Publication was of Vol. II was delayed by the French revolution and Napoleon. The Université catholique de Louvain has published ""Aims & Objectives"" for a modern critical edition. The text is set in two columns per page with the Greek placed at the inside and the Latin at the outside. In vol. 2, the text of the ""Carmina"" is set with 1 column per page with the Greek on the left and the Latin on the right. There are printed marginal notes, and more extensive printed notes & commentary underneath the text. Vol. I has two nice copperplate engravings after paintings by Jacques de Sève (active 1742-1788). The one on the title page representing Mary, Gregory & 3 cherubs sitting in the clouds was engraved by ""Ingouf Junior Sculp. 1778""--probably François-Robert Ingouf (1747-1812). It is 13 x 17.3cm. The second engraving is at the top of page 1 and is engraved by the French engrave Charles Étienne Gaucher (1740-1803). It depicts the front of the interior of a church with a man attempting to place (or remove) a tablet on the altar. Behind him are people in various sstates of agitation including a women with a rock in her raised hand, with other rocks scattered on the floor near the altar. It appears that the chalice on the altar has been tipped over. The same illustration is reproduced as a lithography at the top of P, 1 of Vol. II, but is of a much darker quality. There are two nice woodcut initials on p. 1 of vol. 1,--on each column, Greek & Latin; as well as woodcut head and tail pieces. Two large folio volumes in matching binding mid 19th century or a bit later. Bound quarter leather spine with black/orange/grey/tan marbled paper over boards, simple gilt title lettering on spine, marbled tan/red/black endpapers. The covers are rubbed some, corners are worn through the marbled paper but consolidated with book adhesive, there is mark-off from the turn-ins of the leather spine on the endpapers. Vol. I is very clean with almost no foxing. It does have a narrow dampstain on the fore-edge of leaf 9M1, and a stain on the outside bottom corner of 10G1--3.5 x 5 x 6cm. Vol. II has varied light foxing throughout. It has a 10 x 2.5cm marginal stain (coffee, tea?) on the fore-edges of leaves 14T2 - 14X2 Collation. Vol. I: 2 unsigned leaves, A2 only, a-3d2, 3e1, A1only, B-Z2, Aa-10Z2, 11A-11M2. Vol. II: 2 unsigned leaves, a-f2, A-13Z2, 14A-14X2. Collation of Vol. II uses both I & J and U & V. Pagination. Vol. I. (1) half-title, (1) blank, (1) title, (1) blank, (2) Monitum, i-lxxviii Præfatio, lxxix-cxcv Vita...Gregorii etc., cxcvi-cci indexes, (1) blank, [3]-906pp text, 907-967 indexes, (1) blank. Vol. II: (1) half-title, (1) printer, (1) title, (1) blank, [i]-viii Præfatio, [ix]-xxxiii indexes, (1) blank, [1]-1355pp text, (1) errata, [1357]-[1396]pp indexes. Large folios, 41.7 x 28.4cm (binding); 40.4 x 25.7cm (page block). "