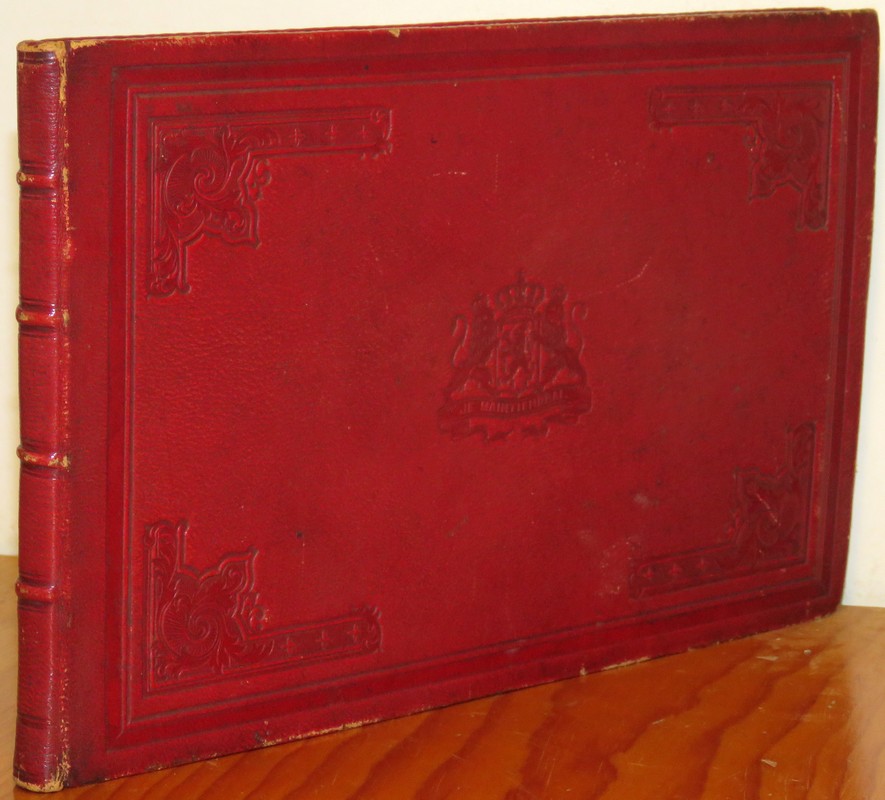 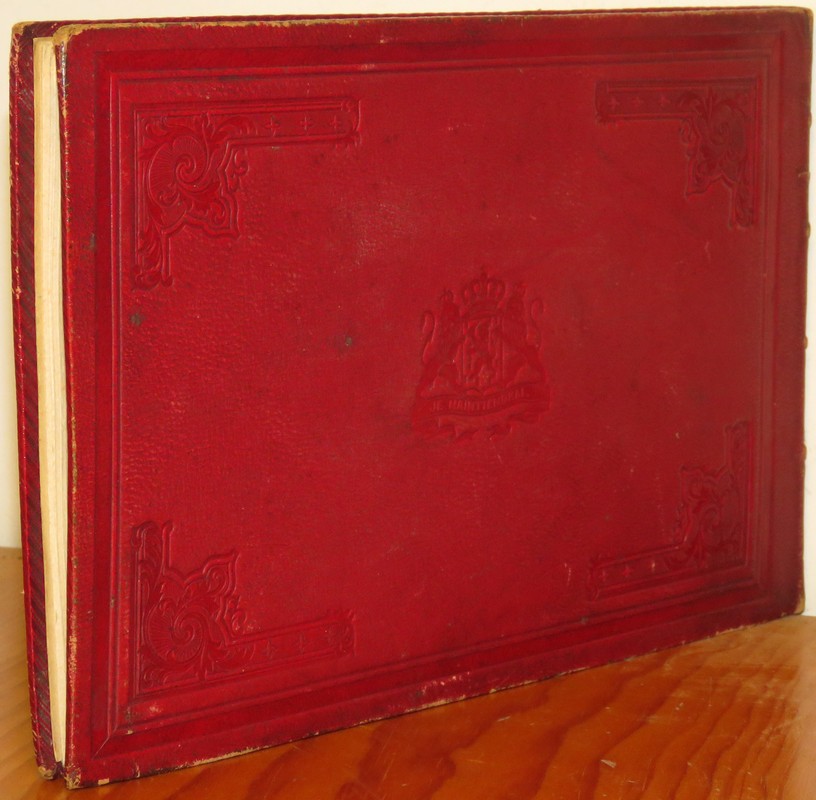 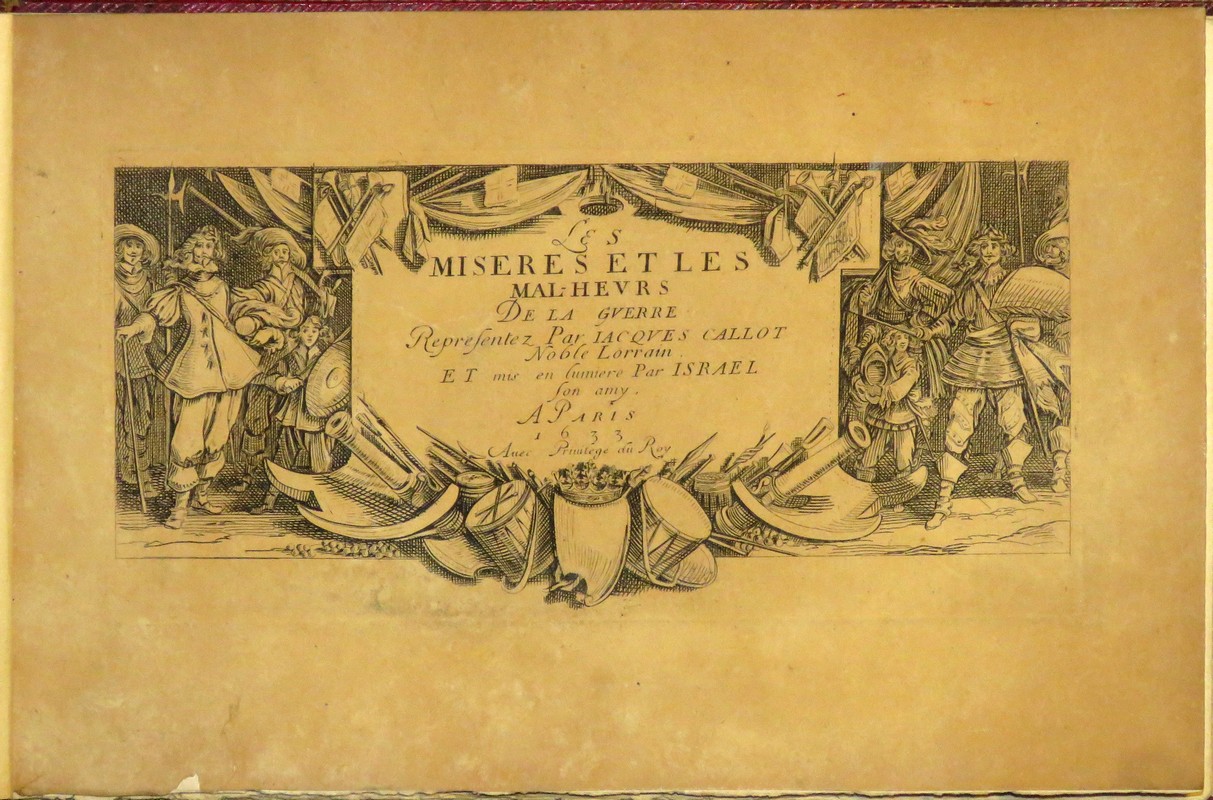 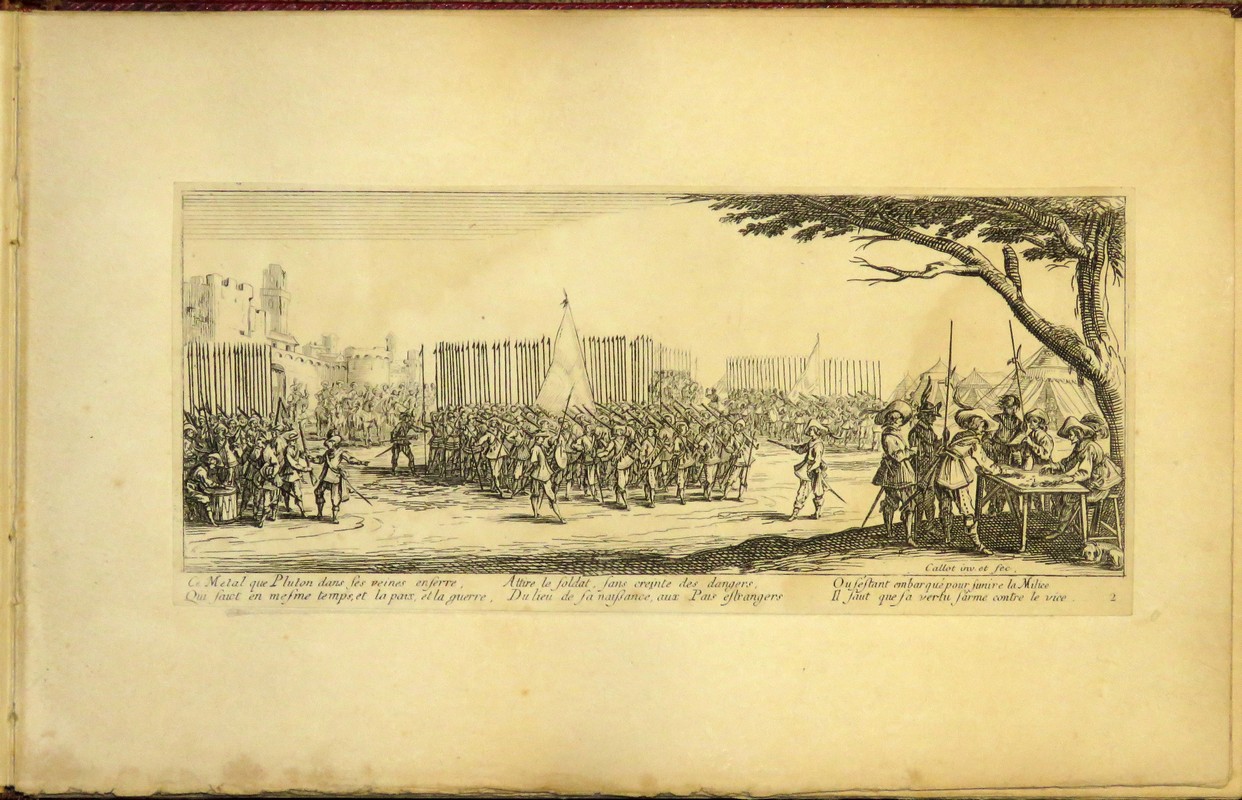 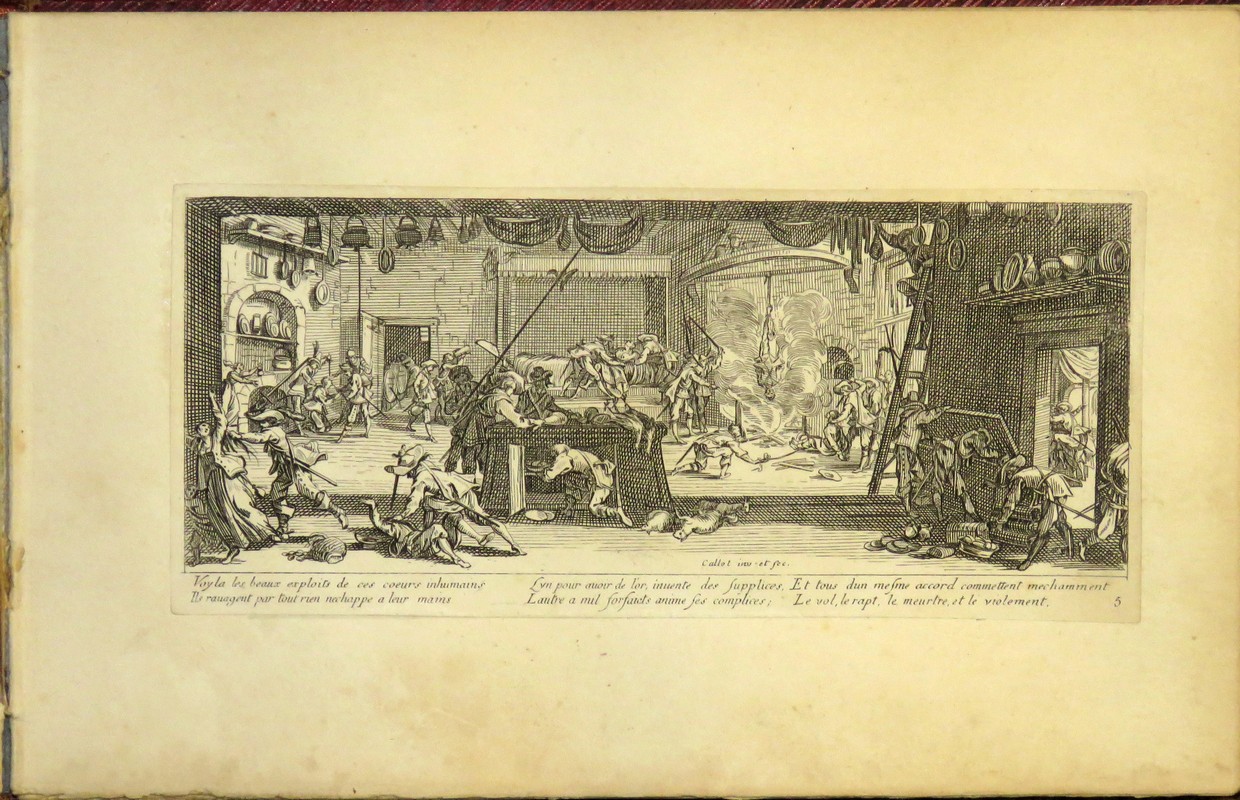 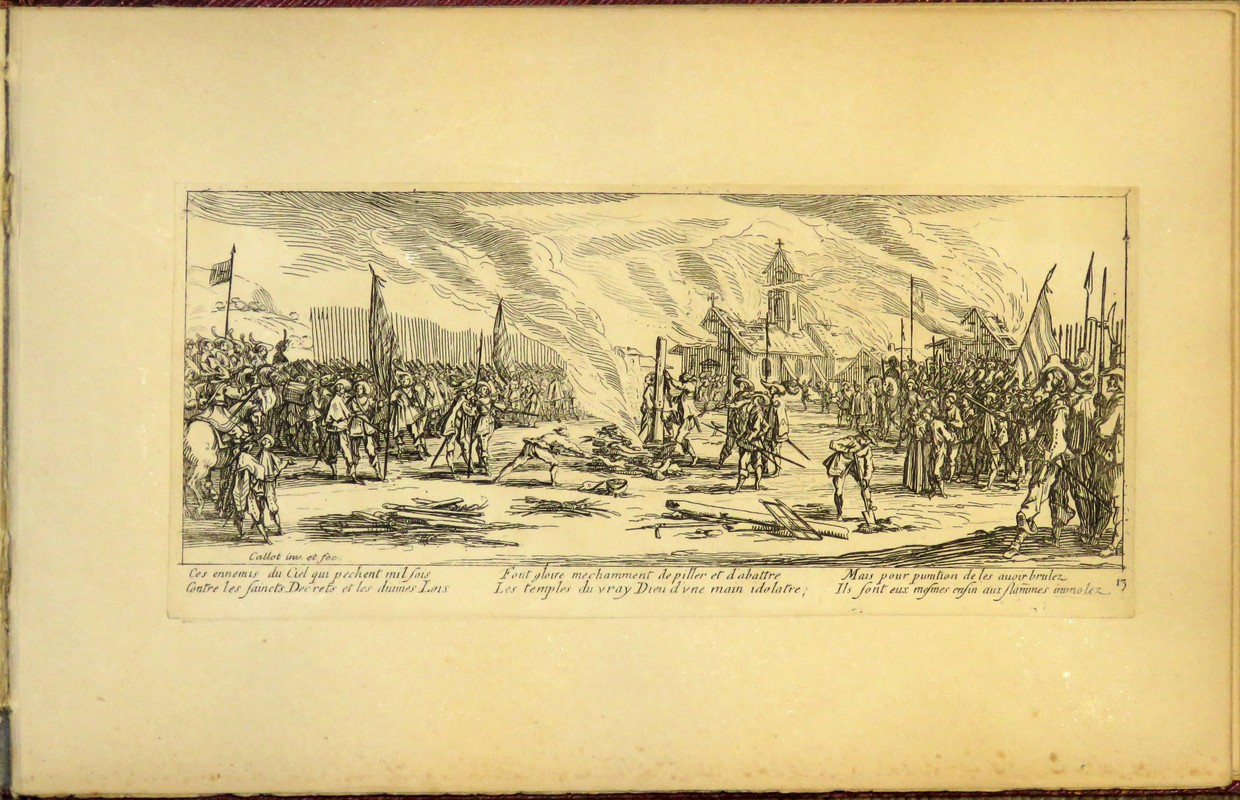 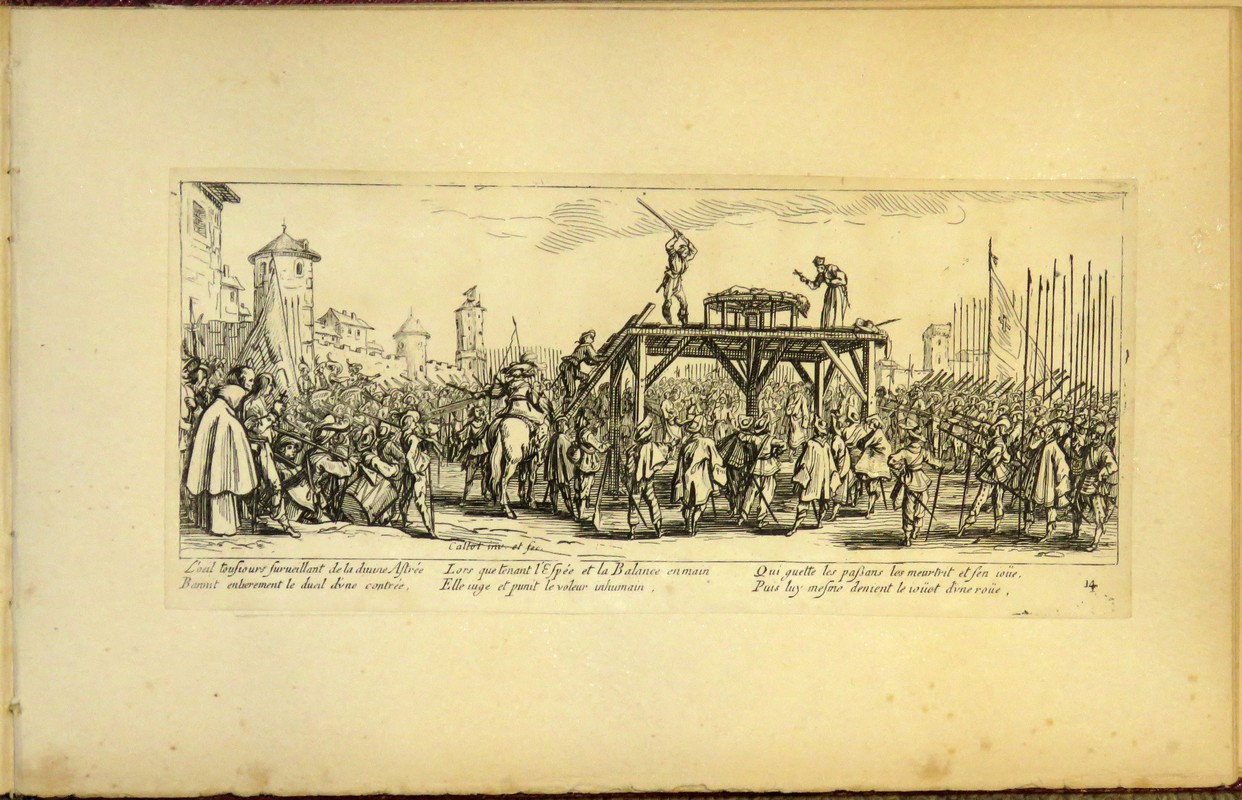 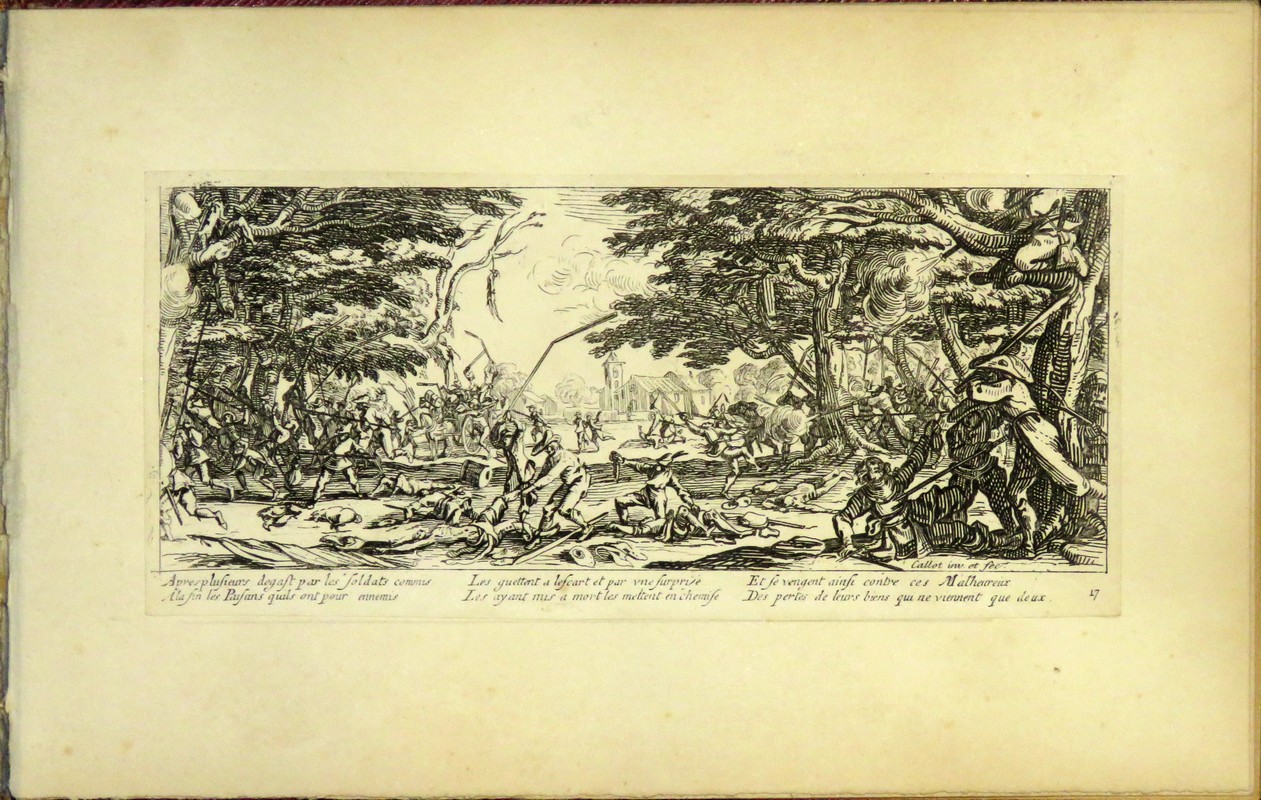 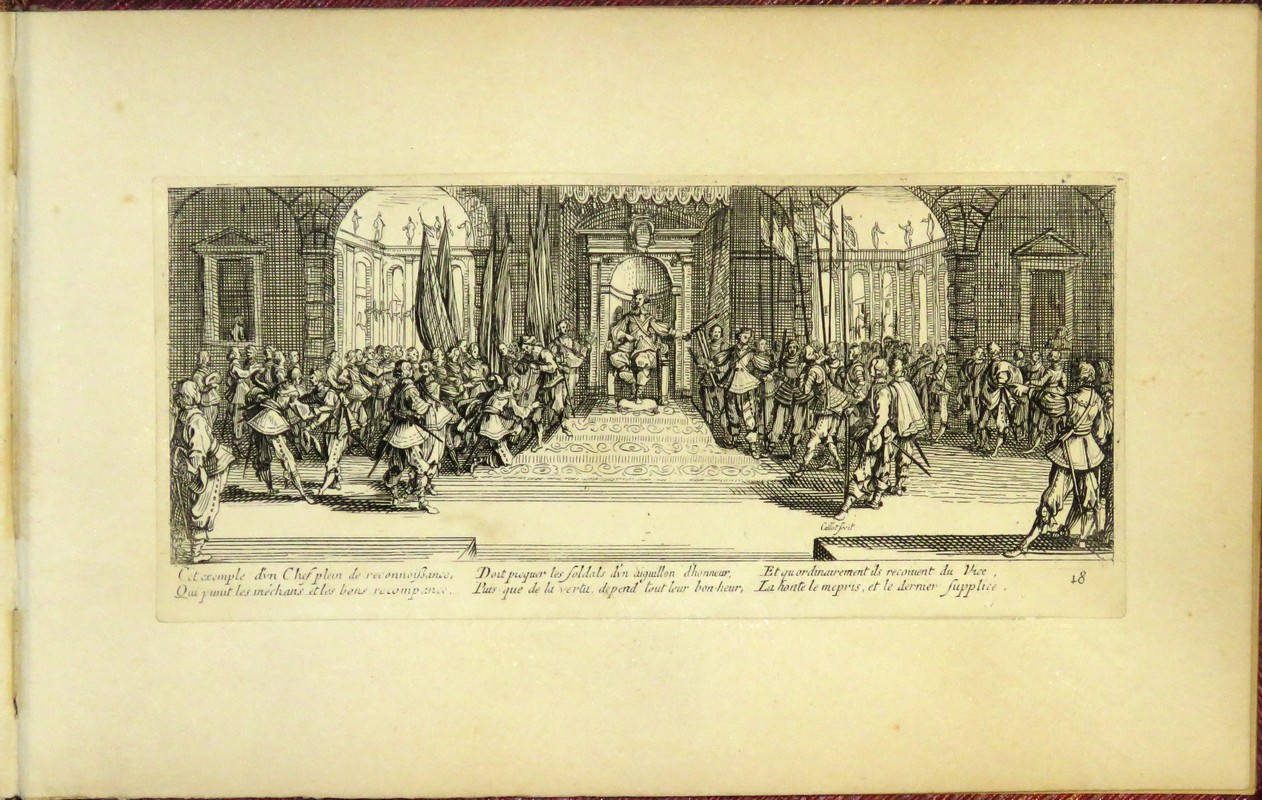 "Jacques Callot (1592-1635) an important French engraver. ""He engraved in all about 1600 pieces... No one ever possessed a higher degree of talent for grouping a large number of figures in a small space, and of representing with two or three bold strokes the expression, action and peculiar features of each individual. Freedom, variety and naïveté characterize all his pieces. ""--The Encyclopædia Britannica, 11th Edition, 1910, 5:58. Callot also had developed an advanced method of etching using a slanted needle which allowed diversity of width within each line. His Les Miseres et Les Mal-Heurs de la Guerre is a very early anti-war illustrated work. The prints in the work ""show soldiers pillaging and burning their way through towns, country and convents, before being variously arrested and executed by their superiors, lynched by peasants, or surviving to live as crippled beggars. At the end the generals are rewarded by their monarch.--PBA Galleries description, 2016. ""One reads about this subject in the manuscript notes of Mariette. This works represents particularly the life of the soldier and a representation of all that it makes others suffer and a tableau of all that it makes others suffer... It is one of the works where this talented engraver gave the most proof of his knowledge and that gave him the greatest acclaim.""--translation. The book consists of 18 copperplate engravings including the title page. The engravings are 8.5 x 19cm on paper that is 15.4 x 24.2cm, oblong. Bound in nice blind-tooled red morocco leather with raised bands, covers stamped with floral & shell design in corners set with in wide border, center coat of arms depicting two lions holding up crown and banner and ""Je Meantiendrai"" underneath--the coat of arms of Netherlands. Nice marbled enpapers in maroon, green, blue yellow, gray & cream. Covers rubbed some at extremities. The title page is tanned considerably. The rest of the etchings are relatively clean but with some foxing mostly in the bottom margins. This is the First Edition, Third State with arabic numeration and the 6 line verse by l'Abbe Marolle set in three 2-line columns beneath each etching, except the title. On these, the third state the words L'excudit of Israel on numbers 2 to 18, as well as the mention of privilege on numbers 2 to 17 were removed. The words were replaced by these: Callot inv. et fec. On #18 is Callot fecit. The words Israel excudit are removed. The margin is surrounded by a straight line. See Meaume No's 0564-0581.--online at http://oeuvreclt.free.fr/prof.xml#MEAUME-0556. "